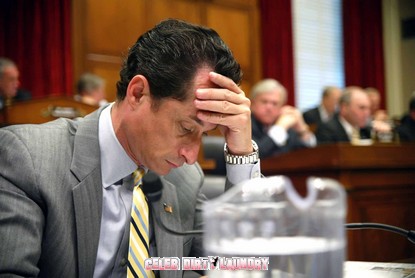 Weiner made a desperate attempt to cover up everything, urging Lee to lie about their relationship. On June 1, he e-mailed her: “The key is to have a short, thought out statement that tackles the top line questions and then refer people back to it. Have a couple of iterations of: ‘This is silly. Like so many others, I follow Rep. Weiner on Twitter. I don’t know him and have never met him. He briefly followed me and sent me a dm saying thank you for the follow. That’s it.’”

The resignation comes after several weeks of media frenzy after he finally admitted he had sent pics to Ginger Lee and other racy photos to at least six women over the last three years. More photos have since become public, including one of his naked genitals and others of him posing in the House gym.   What do you think?  Should Weiner have resigned?