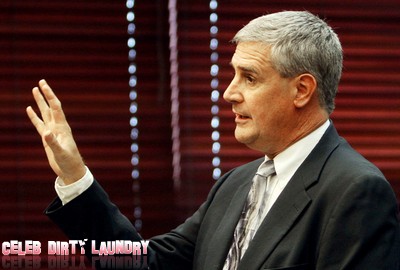 Jeff Ashton was the prosecutor of Casey Anthony who quit his job and immediately after the murder trial and wrote a tell-all book, ‘Imperfect Justice: Prosecuting Casey Anthony’ – in order to cash in on his failure to convict murder mom, Casey Anthony. Now Ashton teams up with another mercenary, the blowhard Dr. Phil McGraw, in order to promote Ashton’s book on McGraw’s TV show this week. Dr. Phil cares about ratings above all else – as we know from the fact that he opened his current season with an interview with George and Cindy Anthony, the parents of Casey Anthony.

In the ‘Dr. Phil’ interview, Ashton discusses how he thinks Caylee Anthony died and why the jury acquitted Casey Anthony of murder in her daughter’s 2008 death.

‘Jeff will reveal the contents of Casey Anthony’s psychological report. This has never been disclosed before,’ McGraw says in the preview.

Ashton, an assistant state attorney with the Orange-Osceola State Attorney’s Office for three decades, retired days after the verdict in the case was handed down. Jurors that spoke out after the proceedings said the prosecution did not provide enough evidence for them to find Casey guilty of murder.

Jeff Ashton is a creep and Dr. Phil is a mooch – it seems totally unfair that a failed prosecutor is set to make millions off of the very trial he was responsible for screwing up and losing.

Do you agree with me? Should a prosecutor who blew the murder trial and allowed Casey Anthony to walk away free turn around and make a fortune off a book about the trial?