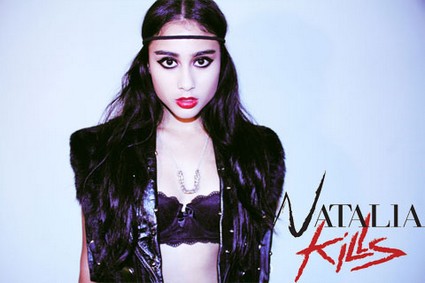 Last week, Celeb Dirty Laundry was fortunate to have the opportunity to interview one of the most promising new artists, Natalia Kills.  Natalia was signed by will.i.am three years ago to Interscope Records and has already had a top 10 hit with her single ‘Mirrors‘  in Austria, Germany, Poland and United States.   Her solo album ‘Perfectionist‘ made its debut in Europe back in April and is available in the US and Canada  today.  (August 16, 2011)  In celebration of the release we’re giving away THREE copies of the album to three of our lucky readers!  HERE

In our interview below with Natalia, she revealed why she gave up on acting, working with will.i.am, her thoughts on Bruno Mars and being compared to Lady Gaga.

You made your acting debut at age 7 in the TV show, New Voices, and became a regular as ‘Sima’ in the sitcom ‘All About Me’. What inspired you to become an actress at such a young age?
I knew I had to live a creative life and be a performer of some kind but I thought I was meant to be an actress.  I was wrong though.

Do you ever worry that because you started a career in showbiz at such an early age, you could face a meltdown such as other celebrities i.e.(Britney Spears, Lindsay Lohan, Christina Aguilera)?
I regularly have meltdowns… what’s wrong with that?

You recently shot the music video for your latest single ‘Free’ featuring will.i.am, what was it like working with the man who also signed you to his label?
It’s great! I’m so happy with the video, I directed it with Guillaume Doubet and Will was so great to work with after all this time! I wanted to make a video that showed how silly fashion is, even though we all love it so much! Its like a Vogue shoot on acid. Will really brightens it up too…

Your debut album Perfectionist was released in Germany, Austria and Sweden earlier this year, what can your fans worldwide expect from the album?
There is a new song on the US + Canadian version called “Kill My Boyfriend”… its hilarious! Its upbeat like “FREE” but it’s somewhat more psychotic with the lyrics.

You’ve been on tour with Kelis, Robyn, Ke$ha, Bruno Mars, B.E.P and will be supporting Katy Perry on her California Dreams Tour later this month – which of these have been your favorite opening/supporting gigs and why?
I Love Robyn- she’s so talented and i’ve been a huge fan for many years… she’s one of the best performers I’ve seen! And the Kesha crowd was great… they had so much energy. I really loved supporting Bruno Mars because he’s an incredible musician but he doesn’t take himself too seriously… and he is so much fun to hang out with! I’m excited for Katy Perry- I’m definitely a fan- her voice is beautiful and she’s got so much attitude that i can’t wait to see her show when i come off stage…

Your birthday is on the 15th of August which is in a few days (Happy Birthday from CDL). How are you going to celebrate?
Well my album will be out at midnight so that’s a celebration in itself! I’m going to be in NY which is one of my favorite cities and i’m performing at Webster Hall and hosting a private acoustic rooftop performance too… It’s gonna be one to remember!

You’ve been working since you were 7 (1995), you’re known as an actress, a musician, a songwriter and even a director – what does the future hold for Natalia Kills?
I love being creative and i’ve dedicated my whole life to it! I’d definitely like to keep making music, and in the future I’ll go further into directing and hopefully make the some of the films i’ve written. That’d be a dream!

How do you feel about the Lady Gaga comparisons?
It’s incredible that people can see so much potential in me! Its nice that people recognize when people write their own songs and are creatively driven… it’s lovely!