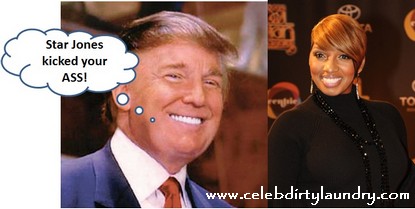 This week our Celebrity Apprentice recap is brought to use by Rosie from Fit Fab Celeb.  If you missed last week’s episode take a look at our last week’s recap to get up-to-date.   Take it away Rosie….  In the first of two business challenges, the stars must produce a live comedy show, but it’s no laughing matter when one celebrity goes missing. Jimmy Fallon and Tracy Morgan assist in the task. Later, the stars shoot a 60-second promotional video for an in-vehicle safety and navigation system, yet one team loses its way because of bickering.  Can’t wait to see which celebrity is acting up this week – why do I feel it is probably NeNe and Star LOL….

Latoya Jackson knows she needs to put in her A-game if she is going to be taken seriously by the men, on ASAP jealously is brewing over the fact that she is back.   Meanwhile, NeNe Leakes is surprised when she asks Star Jones to talk in private and she sneaks out.

Trump meets with all the celebrities and brings up the subject of NeNe and Star not getting along and asked if they have worked it out, NeNe explains that she tried and Star says that she is unwilling to try. Trump then tells Meatloaf to go on ASAP team and NeNe to go on BackBone (Trump has obviously had enough cat fights for one season). Meatloaf is the Project Manager for ASAP and Latoya Jackson is the Prohect Manager for BackBone.

BackBone gets down to business trying to raise funds for the new task which is for charity and NeNe vanishes. Ivanka arrives to check on the team and they let her know that NeNe has vanished without any word. Meanwhile, Trump is on the phone with NeNe and she quits, she then sends the team a text message to let them know and she blames Star. Meanwhile, Latoya is falling short with raising funds – she only gets $1000.00 from the Hiltons and John Rich is surprised and dismayed. John Rich makes a phone call and Jimmy Fallon shows up, gives them a cheque for $10,000.00 and sings a song for them that he wrote ‘You’re Fyred’. Latoya opens the show and BackBone are ready to get their comedy on. Jimmy Fallon performs – the crowd goes wild, an awesome show.

At ASAP the teams are confident and working well together. Star meets with Tracy Morgan and is confident that he will put on a good show. Meatloaf gets donations and is heartbroken at the thought that if they lose the task his charity, Painted Turtle will get nothing. Star calls Trump on behalf of the team explaining that Meatloaf is very emotional about the possibility of losing all the donations and then asks if they keep what they raise for Meatloaf’s charity, win or lose, Trump turns them down. Meatloaf can’t get over it and is pulling everyone down, Marlee has a one on one with him and tells him basically to smarten up and get back to the task otherwise they really won’t have a chance of winning. Meatloaf opens the show and threatens to kick everyone’s ass if they don’t laugh, he commands the stage. The comedians perform and do a good job, then they play a video with Star and Tracy Morgan which really sucked. The last person to perform was Marlee Matlin – didn’t know she was funny? The show ends on a high note – the crowd seemed to enjoy themselves.

In the boardroom Trump asks Meatloaf if he has recovered form their phone call and he starts crying again, he explains that he has such an emotional attachment to his charity. Trump announces that NeNe quit, gave up and he declares that she is fired and Star Jones kicked her ass, no matter what. Trump asks all the members of BackBone how everyone did and they all have nothing but good to say about each other. John Rich tells Meatloaf that if his team loses he will personally gives his charity dollar for dollar what he personally raised for ASAP. Trump announces that ASAP won, they raised $102,080.00 and BackBone raised $82,500.00.

ASAP leaves the boardroom and Trump gets down to the business of firing one of BackBone and with the whole team having done a fantastic job, Trump does what he has to – he fires the Project Manager, Latoya.

Project Managers are chosen for the teams; John Rich for BackBone and Marlee Maitlin for ASAP. Both teams meet with the OnStar executives to get as much info as they can to begin their task.

BackBone gets down to business, Lil’ Jon wants to shoot the video with a complete white background. In the meantime John Rich works on the script – but he’s got a bad sinus infection and has trouble writing which puts a lot of pressure on Lil’ John. They come up with an overall concept ‘Discover ON’ and seem to have things ready to start filming the video. The men arrive for editing and are confident that they have lots of time to get the video to where they want it. The special effects that Lil’ Jon want are time consuming and even though they had lost of time, it is now running out on them, will it all come together? Time to present their video to the OnStar executives who smile, but are hard to read – they tell Trump that Lil’ Jon was a little over the top and they found a huge mistake – their is a woman driving a van without a seatbelt.

ASAP has Meatloaf working like a tornado on crack! Marlee tries to grab the reins and get control of the situation. It is time to shoot the video and Star is worried that they have no script, yet it was her job to do it. Meatloaf is thinking that Star may have done this on purpose to make him look bad (is Star up to her old tricks?).  It is time to shoot the video and Star keeps messing up her lines and a lot of time is wasted. The team finally pulls it together – but it is clear that there is a lot of stress amongst them. Marlee takes a backseat to the creativity – she let’s Meatloaf take over and this could be a huge mistake on her part. Editing has begun and Star lets Marlee and Meatloaf take all the responsibility – Star is obviously thinking about the boardroom later. ASAP presents their video and to the OnStar executives and it seemed to go over well except for a part about a police officer looking for a donut shop.

In the boardroom Trump asks BackBone how theydid and both feel they did an amazing job. Trump then directs the attention to ASAP and Marlee explains how she split up the responsibilities. Both videos are played – Donald Jr. tells ASAP that mocking the police was not a good idea. George tells BackBone that it was a good showcase of the OnStar box, however they felt Lil’ John’s acting was over the top and the women in the video not wearing a seat belt was a huge mistake. Surprisingly, Trump tells BackBone they have won the task – the OnStar executives still preferred their video.

[10:45:14 PM] Rosie LeBlanc: BackBone has left the boardroom, time for Trump to fire someone. Star gets ready to through Meatloaf under the bus. Trump asks Marlee who she would fire and she says Meatloaf because of his off kilter working style, he then asks Star and she says Meatloaf as well. These two women are eating him up alive! Meatloaf comes out guns blazing and tells Trump that Star was responsible for branding – so it was her fault that they failed. Trump tells all three to leave the boardroom. Meatloaf and Star get into it outside the boardroom and when he backs her into a corner, she tells him she is done and cuts him off. This women is a bitch and it is time for Trump to realize that she needs to be FIRED.

Meanwhile, Trump, Donald Jr. and George are listening to the argument from inside the boardroom. Trump asks Meatloaf what was going on and he said that he confronted Star about it being her fault they lost the task and that is what started the heated argument. Star said that she was more upset that Meatloaf called her Sweetie and it diminished her as a woman and Trump says he doesn’t like the political crap. Trump asks Marlee one more time, who was in charge of branding and she says Star and Trump FIRES Star. OMG, a picture tells a thousand stories – Star looked like she was going to cry. Bitch got what she deserved. Finally!

Stay tuned for the rest of the scoop on who else is getting the boot from the show!  Who are you rooting for???

Keep checking back as we update this space!