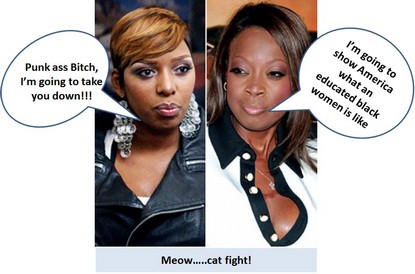 This week our Celebrity Apprentice recap is brought to use by Rosie from Fit Fab Celeb.   Take it away Rosie…. In this evening’s ninth episode of the 2011 season, the Celebrities’ task is to produce a live hair show featuring Farouk Hair System products and Farouk hair stylists. Will one team fail to deliver, or both?  Tonight celebrities will display their flair for hair and one teammate furiously bitches out another, will there be some hair pulling and a good old fashion cat fight, I hope so.

Team BackBone is down to three guys and there is no drama, the ladies are exploding with drama and it will probably be their downfall. The episode begins by showing NeNe Leakes and Star Jones returning to the other teammates from the boardroom and everyone else is shocked that Latoya went home. NeNe says she has a quest “I’m gonna figure out how to f**k Star up, yes I am”. Meanwhile, Star walked back into the room like the smug bitch that she is.

The celebrities meet with Donald Trump for the next task and are introduced to Mr. Farouk who tells them that each team will get two professional stylists and four models for their hair shows. While picking Project Managers, the men play rock, paper, scissors to determine the winner, which is Lil’ Jon. Nene tells Trump that she was choosen by Star and unleashes a torrent of rage on Star. NeNe gets right up in Star’s face and says she is going to take her down because she is not afraid of her, she is not her puppet. NeNe continues to call out Star and Donald interrupts saying the men are boring in comparison. Star claims she didn’t respond to the act because she is an educated black woman and Nene is not. Nene in turn calls her a “Punk Ass Bitch”. (you go girl!)

Latoya visits Donald after firing her, to defend her case. Because she was suffering from laryngitis during the boardroom showdown, she feels she didn’t have a fair chance to defend herself. Latoya asks Trump if she come back to the show and prove that she can do it – she wants a second chance – on the guy’s team!

BackBone gets right down to business checking out previous hair shows for Farouk. John calls fired Celebrity Apprentance, Niki Taylor to help them with their show. Farouk stops by and tells the team their concept “Be Safe, Be Real and Buy American”. John is charge of the stage managing and Meatloaf of the lighting. Lil’ Jon takes the model’s shopping and feels like a pimp picking everything out for them. John and Meatloaf are at the salon and NeNe shows up with Star – they all have to work together, each team on either side of the salon. Ivanka stops by for a visit and she’s surprised at how the men appear to be over confident. Niki Taylor arrives to work with the men and NeNe is shocked while Star sits there looking like the cat who swallowed the canary, catty witch!. It’s the day of the show and the men are down to business. Rehearsal begins and the men are all over the place without a real plan and Meatloaf is disappointed. The men begin the show with Lil Jon as the emcee and he starts off well, but there were long pauses in the show and then Niki Taylor comes on and the shows comes back alive – I think the men pulled it off.

ASAP, NeNe gets right down to business but everyone is looking very somber as they are just not feelin’ it after the cat fight. The team comes up with the theme “Shake Your Beauty” and the ice finally broke within the team. Star gets down to business and offerers all her skill set, she gets some dancers for the show. NeNe comes up with the idea of all the team mates getting their hair done during the show. Marlee and Hope head out to choose the wardrobe for the models. Eric shows up and finds Star working with NeNe and realizes that they are clearly ready to jump down each other’s throats. NeNe dissing Star visa v the camera; in one outburst she says “Star may have lost a lot of weight on the outside but she is still fat in her brain”. Invaka arrives and NeNe lets loose on what she thinks of Star yet again. The day of the show – everyone shows up for rehearsal, except for the team who shows up late. On the stage, NeNe steps up her game, but it doesn’t last – the moment she is off the stage, she fizzles. The show begins and the women do a surprisingly good job until Hope goes on stage and she absolutely bombs – Nene says she looks like Big Bird because her hair was so poofy.

In the boardroom, Trump asks NeNe how her team responded and she says that she felt a bit alone because everyone was not doing their full potential. NeNe goes on to call Star disloyal and a backstabber. Star says she knows the truth about herself and was therefore able to go on and do her work. NeNe then calls out Hope and says she is Star’s puppet on a string. Ivanka tries to get a word in and NeNe just keeps going on and on about Star. Trump asks Marlee what she thinks about all of this and she admits that sometimes NeNe scares her because she is verbally abusive at times. NeNe tells Trump that Star has a reputation for backstabbing and most people she runs into don’t like her.

Trump moves on to the men and Lil Jon says he believes they won.  Trump asks about Niki Taylor – John says it was his idea and they did it because they thought she could bring a lot to the show. Ivanka comments on how she was so surprised by the laid back attitude of the men’s team. Ivanka tells BackBone that Farouk loved the job the men did, but he felt that they didn’t articulate what the products did for safety. Eric tells ASAP that Farouk loved what they did, but he didn’t feel like there was a theme, NeNe was weak as an emcee and they were not impressed with Hope’s performance. Trump tells the men that they won and he has a surprise for them, Latoya walks in! Trump tells the teams that Latoya came back to see him after she was fired and made a strong case that she should be allowed back on the show and he agreed to put her on the men’s team. Trump asks Latoya who she prefers, Star or NeNe and she says NeNe. Trump is surprised that Latoya pretty much said the same things about Star that NeNe did.

The men toast the arrival of Latoya and the women get ready for the show down. NeNe tells Trump that Hope or Star should be fired. Trump asks Star who she would choose to have beside her moving forward and she says Marlee and Hope. He then asks Marlee who she would least want on her team, she says NeNe because she was the Project Manager and it was her fault they lost. Ivanka rephrases the question – who would Marlee want with her moving forward to fight Latoya and the men’s team, she says NeNe. Marlee is told to leave the boardroom, NeNe, Star and Hope get ready for some more bad mouthing and back stabbing.

Hope and Star try to gang up on NeNe and tell Trump about the things she has said about Latoya and Trump reminds them all that Latoya choose NeNe out of everyone, obviously it didn’t bother her that much. Trump tells Hope, this is just not her world, she is fired.