Celebs At The Much Music Video Awards In Toronto, Canada – Photos 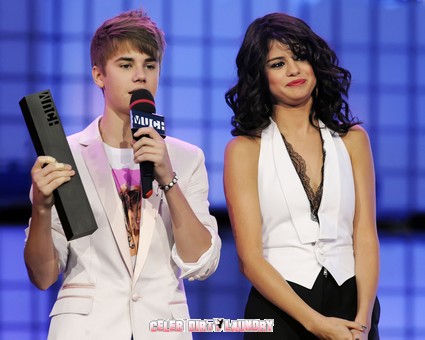 Last night June 19th, 2011 the Much Music Video awards was held in Toronto, Canada.  Lady Gaga, Justin Bieber and Taio Cruz went home with two awards.  Selena Gomez took to the stage as co-host of the event and Lady Gaga kicked off the show with a performance of her new track The Edge Of Glory.  The crowd went insane when she screamed: “You guys may not know this, but I love everything about Canada.”

Justin won the first prize of the night and in accepting it broke every tweens heart in the world.  As Selena handed him the award he said “Nice to meet you, you’re very beautiful. Maybe we could go out sometime?” The video is available HERE.  Avril Lavigne caused some controversy by dropping the F bomb during her performance of What the Hell.

Gaga closed the show with a performance of Born This Way.   We also had Lady Gaga emerging from a cocoon during her performance.   We have the pictures below for you of the event and of course a picture of GaGa in the cocoon.  Enjoy!