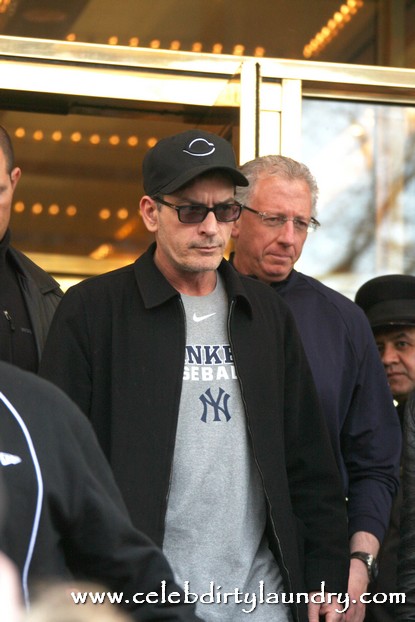 Pauly D joined Charlie Sheen last night for his Boston show but it didn’t help.  It seems that without scripts and retakes and lots of canned laughter Charlie is not much of a winner.

Despite having Pauly D’s help at his gig at Boston’s Agganis Arena Tuesday night, Charlie received poor crowd reactions and even worse reviews on the eighth stop in his My Violent Torpedo of Truth/Defeat Is Not an Option tour.

“Just before 10 last night, as hundreds of disgusted spectators streamed toward the exits at Agganis Arena, Charlie Sheen shouted from the stage: ‘Wait, don’t leave! I’m not done!’”   The Boston Globe’s Don Aucoin wrote of the event. “But most of them kept right on going, and who could blame them?”

“For nearly 90 minutes they had been subjected to a witless barrage of non sequiturs, non-stories, non-jokes — a non-event, start to finish.”   Aucoin wrote that the drug called Charlie Sheen “may be losing its potency.  “When the dreary debacle was finally over, the applause died before Sheen had even left the stage.”

During his act, Pauly D stepped onto the stage, and Sheen told him, “You don’t have to sit down, f**k that!”  The Jersey Shore star, upon joining Sheen, told him, “I wanna be you for one day!”  Sheen played to the cheering crowd, asking them, “Are we happy to see this young man?  We told you there would be surprises, I told you, none of this is planned!”

While he had Charlie’s ear, Pauly D went into business for himself, telling the former Two and a Half Men star, “I got a new show coming up and I want you to be on it.”  Sheen replied, “What about just one episode and we’ll make it epic!” and Pauly D agreed.  “I look forward to it, you’re awesome,” Sheen told the MTV star. “You’re hotter in person!”  After Pauly D left, Sheen said, “I don’t watch the show… but I can tell he’s very popular here.  He’s a handsome bastard, I can tell you that.”

Charlie Sheen is clearly out of his element when performing live – If he were to schedule another tour now that people know he is hopeless on stage tickets would remain unsold.