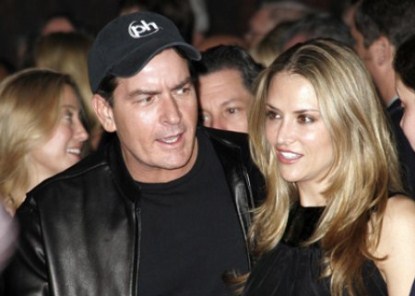 Time for our daily Celeb Dirty laundry “Around The Web” post where we feature some of our friends  and the hot events today that standout including:  Believe it or not we have heard rumblings that Charlie Sheen and his ex-wife Brooke Mueller were considering getting back together.  If Brooke is considering this she need sto get her head examined.  The news and controvery over Ricky Gervais’s Golden Globe performance has not stopped.   Many celebs have had mixed Reaction to Rick Gervais At The 68th Annual Golden Globe Awards.  Meanwhile further rumors that Ricky was fired for gay Scientology Joke at Golden Globes?  Not sure if that one is true.  Ricky has denied he was reprimanded for his performance.  In sad news Laura Linney missed the Golden Globes due to the death of her father.

Meanwhile all 21 members of the Brown family from TLC’s polygamy themed reality show Sister Wives are pulling up stakes and moving out of state! Find out where they’re headed.  Do people actually watch this show?  In related country bumpkin news Britney who went from a cold mess to a hot mess and is back to the cold mess.  Britney Stops at McDonalds with the Boys and is looking pretty rough.

Paris Hilton proving you cannot get her down believe it or not she landed another Reality TV Show ‘The World According To Paris’.  The girl keeps raking in the $$$$   guess someone out there is interested in her.

To end we leave you with an eye candy gift. Oh La La Mag has exclusive pics of Sean Uribe.    Looking at those photos we understand why Florida was one of the only states not covered with snow last week … yes, it’s pretty hot down there… Enjoy them!