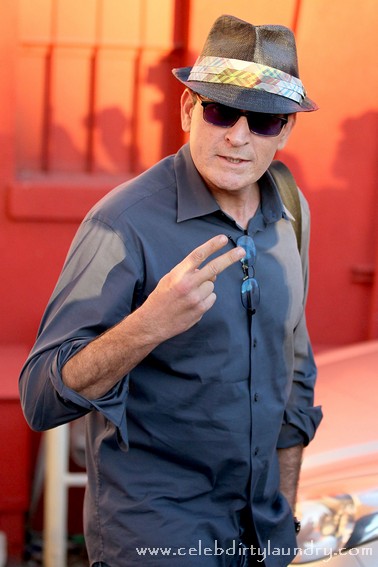 Charlie Sheen gave a master performance during his interview with the Alex Jones Show, attacking targets ranging from Alcoholic Anonymous to his own show, “Two and a Half Men.”

“The only thing I’m addicted to right now is winning,” he said asserting that he is clean and sober.  He that his ability to get clean is absolute: “My success rate is 100%,” he boasted

Charlie focused most of his anger towards Alcoholic Anonymous. “I was shackled and oppressed by the cult of AA for 22 years,” Sheen said.  “I finally extracted myself from their troll hole and started living my life the way I want to live it.”  “It’s vintage, outdated and stupid and it’s followed by STUPID people”  Charlie added: “I hate them violently. They will come at me.”

At one point he said: “Debate me on AA right now.  I have a disease? Bulls**t.  I cured it right now with my mind.”  Charlie sounds like a middle-aged addict I used to know – this fellow used to say in all sincerity “It’s easy to quite cocaine, I’ve quite dozens of times.

Charlie even attacked  his own show at one point, saying: “I was told if I went on the attack they’d cancel the show. are they happy with the 5 billion dollars they made off me or do they want 10?”

Charlie added: “My motto now is either you love or you hate and you must do so violently.  I don’t live in the middle anymore.  That’s where you get embarrassed.”  “If  you love with violence and you hate with violence there is nothing that can be questioned.”

Talking about his life and the new women in it, he said: “I’m going to hang out with these two smoking hotties and fly around the world.  It might be lonely up here but I sure like the view.”

When interview host Alex Jones said, “I’m just glad you’re clean…this is it” Charlie backed away from promising he’d stay clean forever, saying “Right now it is. I don’t subscribe to any model.”

Charlie star attacked AA, religion and a variety of targets.  He characterized religion as “talking snakes” and a waste of a Sunday.”
Charlie did have nice words to say about his new woman, Natalie, reading a letter she wrote him, that, in part, praised him for his “wisdom.”  I wonder who is paying Natalie’s bills?

Say what you like about Charlie (and we do) but he is one of a kind.