Chef Ramsay Shown To Be A Big Fake Snake 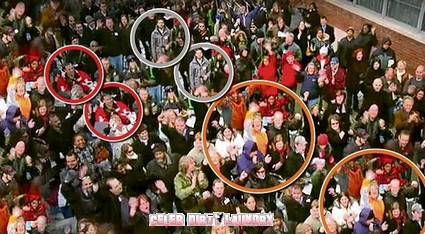 British Big Mouth, Chef Gordon Ramsey, who co-produces his own show, MasterChef USA, showed himself to big a phony this week.

Viewers spotted the same faces in the audience, over and over as at least three small groups of everyday people were replicated to make it look like there were hundreds in the studio. The clip from episode five of the series ran with a voice over saying that amateur chefs had traveled from every corner of the US.

The implication was that hundreds of competitors had turned up to win the show’s prize of over $200,000 when in fact the number was far less.  But the bad editing job, shown below, meant that a man in a grey coat – ringed in grey – is seen in one row, and then again just a couple of rows forward.

A woman waving in a bright orange jacket – circled in orange – appears several times as the camera pans over.  Another man in a bright red anorak – ringed in red – is featured twice, just two rows apart.  Producers behind the American version of the popular BBC1 cookery competition, admitted that scenes had been faked.

A spokesman said: “We have reviewed the footage and it’s clear that the scene was enhanced in post-production.  We sincerely apologise to our viewers and hope that they still enjoyed the show.”