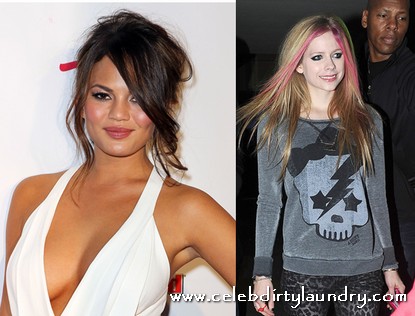 Chrissy Teigen, Sports Illustrated model and John Legend’s girlfriend, has done her fair share of trash talking towards pint-sized superstar Avril Lavigne. Chrissy has been running her mouth on her Twitter account lately. She took the job upon herself to bash the Canadian native Sunday.

“If u told me I could have 1 kid, but it would be exactly like avril, I would choose to have a barren, sterile existence that ends when I die,” is what she tweeted Sunday afternoon. Her bio on Twitter reads, “”i like food a lot and i like modeling a little and i like my dog and boyfriend somewhere in between.”The model then continued to Tweet, “”Watching an avril lavigne interview. The second most painful thing I have watched today after ‘the goods.’ “

What has Avril ever done to you?! Hating on The Goods is understandable, but she is overreacting to Avril. She continued attacking other celebs by tweeting, ““Kind of feeling bad for gwyneth paltrow. Her fancy butt just can’t win. I do want her cookbook. For the recipes. No stories will be read.”

Lavigne’s last tweet talked about how she was in Beijing to kick off her Black Star tour. This could be one of the reasons why the star hasn’t had a chance to fire back a response. Maybe she is trying to maintain the peace?  Very doubtful.  Do we see a new catfight brewing?