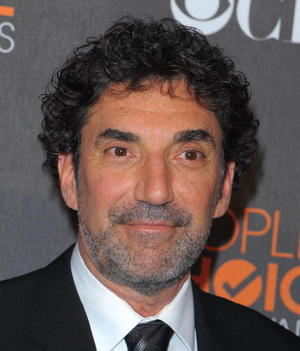 Two and a Half Men creator and executive producer Chuck Lorre appeared to have compared the recent string of natural disasters in Japan to his war-of-words with Charlie Sheen, in his latest vanity card Monday night.  What Chuck implied was that he’s humbly accepted what’s truly important in the grand scheme of things, and it isn’t relatively petty issues with Charlie Sheen.

Lorre, whose resume includes TV hits like Dharma & Greg and The Big Bang Theory, has been using his vanity cards – these air for a split second at the end of his shows – to communicate his thoughts on the Sheen situation and other areas of interest to him.

Chuck has been publicly sparring with Sheen and posted the following words in vanity card # 336 following Monday night’s episode of his other hit CBS show, Mike & Molly:  “One minute life is one thing.  The next minute, life is something else.  The feeling is one of disorientation.  Topsy-turvy. Upheaval.

Then the Earth says, ‘No. I’ll show you topsy-turvy.  This, Chaim, is upheaval.’ (Chaim is Chuck’s Hebrew name which Sheen infamously called him in a rant, prompting whispers of anti-Semitism , although Sheen has denied this.)

Well its nice to know that Chuck hasn’t limits to his view of his own importance – does Charlie Sheen?