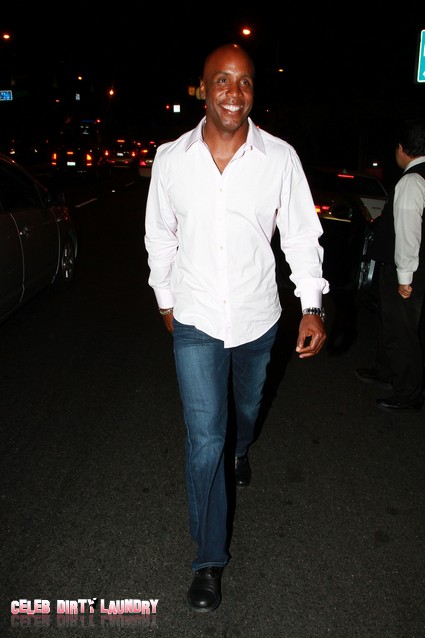 Barry Bonds was so juiced up on steroids that any one with an experienced eye could see it. The Major League Baseball record holder – career total homes runs (762), and home runs in a season (72) – achieved his results by breaking the rules and using banned steroids. Then Bonds lied under oath repeatedly – and was convicted in April of his crimes and today was sentenced to 30 days house arrest and 2 years probation.

Bonds’ Major League Baseball records should be expunged – they are meaningless – he is cheater and a liar and bum.

But U.S. District Judge Susan Illston immediately stayed her sentence while Bonds appeals his conviction. Prosecutors objected to the stay.

During a hearing that lasted less than an hour in San Francisco, Illston imposed the sentence on the 47-year-old Bonds, who was convicted in April by a jury that was torn over allegations he repeatedly lied about his own steroid use under oath, deadlocking on three other perjury counts against him. The sentenced also includes 250 hours of community service.

Bonds did not take the opportunity to address the judge before the sentencing. Afterward, he hugged supporters outside the courtroom and then left amid a crush of reporters without saying a word publicly.

The jury concluded Bonds obstructed justice by providing a rambling, evasive answer to a question about whether he’d ever been supplied with steroids or injected by his former personal trainer, Greg Anderson.

Federal prosecutors sought to imprison Bonds for at least 15 months, which would be one of the harshest punishments meted out against a defendant convicted in the Balco case. Defense lawyers pushed for probation, arguing that Bonds had a clean criminal record and a quiet pattern of doing charitable work in the community during his long career in Major League Baseball.

Federal probation officials recommended that Bonds be put on probation, although with some period of “location monitoring,” which in other Balco cases resulted in home detention. Tammy Thomas, a former world class cyclist convicted of perjury, received probation and a home confinement sentence, as did former track coach Trevor Graham, convicted of lying to federal agents.

But Bonds was always the most high-profile name linked to Balco, a now-defunct Peninsula laboratory that sprouted the largest doping scandal in sports history. The former San Francisco Giant was hauled in front of the grand jury probing the lab in 2003 as he chased baseball’s all-time home run records, asked to explain records that appeared to link him to steroid use, Balco, Anderson and Balco founder Victor Conte. Bonds repeatedly denied knowingly using performance enhancing drugs, prompting years of further investigation that led to his indictment on perjury and obstruction charges nearly five years ago.

To critics, including Conte, the government’s case was a waste of taxpayer money to go after a superstar whose legacy was already tarnished by strong evidence he used performance enhancing drugs in the latter stages of a surefire Hall of Fame career. But to the government, it was a case designed to show that no one can undermine the grand jury process by lying under oath, regardless of their fame.

During April’s trial, federal prosecutors unveiled a host of witnesses who tried to link Bonds to steroid use, including his former mistress, Kimberly Bell, his estranged business associate, Steve Hoskins, and Hoskins’ sister, Kathy. Several current and former baseball players were also called to the witness stand to describe how they received steroids from Anderson, including former Oakland A’s star Jason Giambi, and his brother, Jeremy. Former Giants trainer Stan Conte also wound up testifying about his dealings with Bonds in the Giants clubhouse.

Prosecutors, however, were always hamstrung in the case by Anderson’s steadfast refusal to testify against his childhood acquaintance and longtime client. Anderson spent about a year in federal prison for refusing to testify before the grand jury investigating Bonds for perjury, and another three weeks during this spring’s trial. As a result, Bonds’ defense was able to argue that Bonds never knew the substances Anderson was giving him were newfangled Balco steroids known as the “cream” and the “clear.”