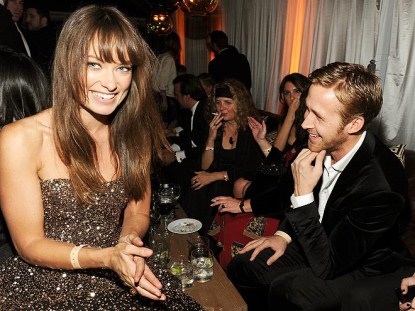 We knew it was only a matter of time before the newly single Olivia Wilde was seen canoodling around Hollywood with a hunk on her arm.    And that lucky fella is the one and only Ryan Gosling.    The Blue Valentine star, 30, and the ‘Tron’ actress, 26, were spotted on February 27th at ‘Nada’, a trendy Mexican restaurant in Cincinnati.  Gosling is there filming ‘The Ides of March’ with George Clooney. So what’s her excuse?    After brunch the two spent the afternoon at a nearby aquarium in Newport, and according to E online they were even caught holding hands…spicy!!!

I’m all for being married to a Prince and everything, but Ryan Gosling is Hot with a capital H!  One word – Notebook.  Enough said.  And let’s be honest, Olivia isn’t too hard on the eyes either.  Not only did pictures surface of the two ‘deep in chat’ during the Golden Globes (is that what we’re calling it now?), but the rumor mill around La La Land is that the two have increasingly been spending time together ever since.

Just shy of 3 weeks, the young actress announced her split from the young Prince, Tao Ruspoli.  A friend was quoted as saying the reason behind the split was “For typical Hollywood reasons: Her career exploded and she saw being married to him as not much fun”.  Well it’s a good thing Ryan’s famous too! I for one want to see where this little love match goes!!