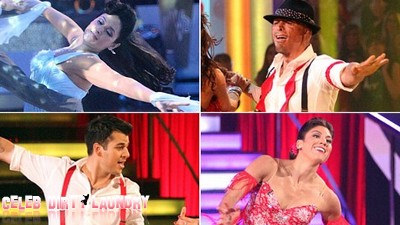 Enjoy tonight’s Dancing With The Stars Cha Cha relay performance video. On tonight’s ninth episode and the semi-finals of Dancing With The Stars couples will have to impress the audiences with three routines.  The competition is nothing short of intense tonight, with everyone wanting to get into the finals.  If you missed tonight’s show you can read our official recap here!

All four of the couples are dancing the Cha-Cha in a relay. They will dance to I Like the Way It Feels by Enrique Iglesias and every couple is going to dance for 35 or 40 seconds, then leave so another couple can come onto the floor and continue dancing to the same song.

Len said: I think the whole night has been like going out for a beautiful. The Ch Cha was the desert. Bruno said – tonght everyone delivered, a fantastic show. Three dances one after the other is a very, ver hard task. It is going to be hard for us to score. Carrie Ann said: it is really fantastic we get to watch you all one after the other and the dance was not quite as expected!