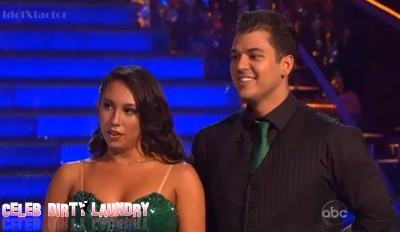 Enjoy Rob Kardashian’s Samba & Argentine Tango Performance Videos.  On tonight’s ninth episode and the semi-finals of Dancing With The Stars couples will have to impress the audiences with three routines.  The competition is nothing short of intense tonight, with everyone wanting to get into the finals.  If you missed tonight’s show you can read our official recap here!  If you missed Rob Kardashian’s performance last week, you can see  video of it here!

The dances Rob Kardashian and professional dancer Cheryl Burke will be performing are the Samba to Jump in the Line (Shake Señora)” by Harry Belafonte, Argentine Tango and Cha-Cha.   Rob said about performing three dances, “The Samba’s pretty hard.  That is, I heard, a pretty tough dance but, I mean, all these dances are tough for me ’cause I don’t know how to dance, period. It doesn’t really make a difference to me. It’s all new.”

Rob has been improving week by week.  When he started in  the competition his only goal was to make it further than his sister Kim Kardahsian and now he is competing for the big prize.  If you want to vote for Rob his voting number is 1-800-868-3402.

Rob Kardashian Samba’s Judges Comments – Carrie Ann said: Who are you? What was that? Holy cow it was fabulous! Rob it was amazing, the musicality was great fantastic! Len said: When you came out I thought oh no, but once you got on the floor I thought oh yes. Bruno said You exceeded expectations once you started dancing there was no stopping you. Fantastic!

Rob Kardashian Argentine Tango’s Judges Comments Carrie Ann said: There is not way to fake good dancing and that is what I see in the finals. That was good strong good dancing, passion and power! Len said: It is not where it starts it is where it finishes and you finished strong. Bruno said: You started out as a goofy outsider but now you are looking great.