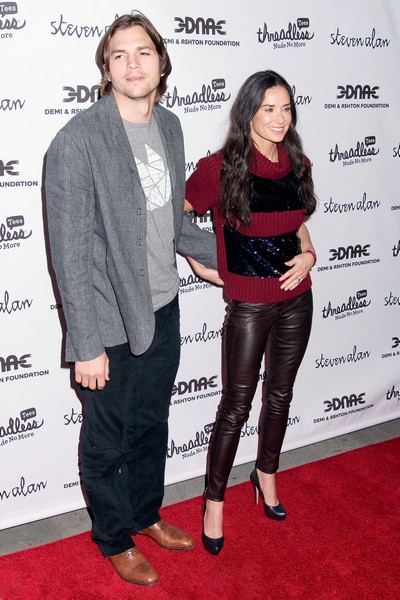 As we reported last week Demi Moore and Ashton Kutcher both have spent time at the Kabbalah Centre in Los Angeles to repair their marriage.  This morning it is being reported that the attempts at reconciliation have failed and the marriage is over.  Ashton has been rumored to be hooking up with a chick named Sara Leal, after telling her that he and wife Demi were separated.  To add insult to injury some of the cheating happened on the night of their anniversary.  Ashton is rumored to have hooked up with two girls in a all-night hot tub party at a $2,500 a night hotel room that night.

Radaronline has more: “They’ve been in counseling.  But when Ashton cheated with Leal in San Diego in the early morning of September 24, it dealt a death blow to the marriage.  “They separated about six weeks ago,” the source said. “Both went to Kaballah counseling hoping to save the marriage. But it’s over now.”

Demi has dropped to 98 lbs as a consequence of Ashton Kutcher’s infidelity and her broken-heart.   At the end of the day if Ashton has done all the cheating she is better off without him.  Meanwhile the couple continue to wear their wedding rings and remain silent on the matter.