US Weekly: Ashton Kutcher Cheated On Demi Moore with Two Girls in a Hot Tub 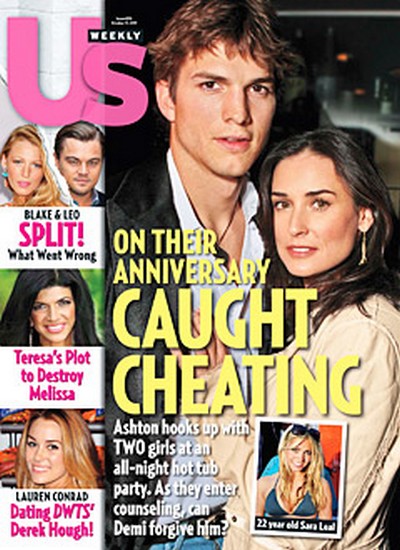 The October 10th issue of Us Weekly features the cover story ‘On Their Anniversary, Ashton Caught Cheating.’  The magazine is claiming that Ashton Kutcher AKA ‘The Cheater’ hooked up with two girls in a all-night hot tub party at a $2,500 a night hotel room.   That is where Ashton spent their six wedding anniversary, while Demi was on a promotional tour. They are wondering if after his bad behavior and counseling will help and will Demi Moore, 48, forgive him?

Us Weekly has more: Prior to that early morning hot tub session, Kutcher began his night drinking vodka tonics and prowling for women with pals Danny and Chris Masterson at Fluxx nightclub — where the pickings weren’t to his liking. “He said none of the girls were ‘hot-tub worthy.  But Kutcher liked what he saw when he met party girl Leal and her friend past 4 a.m. in his 1,200-square-foot suite back at the Hard Rock. “Ashton told them he was separated from Demi,” one source says.

After some “hard-core” flirting, the Two and a Half Men star was “totally into it,” another source says. “Within five minutes, they were all naked in the hot tub, making out!”

Rumors have been everywhere that the two are going through a $290 million divorce.   This is not the first time Ashton has been accused of cheating.  He has been accused of cheating by a girl named Brittney Jones.  Brittney claimed that Ashton and Demi had an open marriage.  With the rumors flying, Ashton partying without Demi on their anniversary and  cryptic twitter messages it seems there could be trouble in their marriage.

If you want to find out more about Ashton’s wild night pick up the current issue of Us Weekly that hits stands Friday!