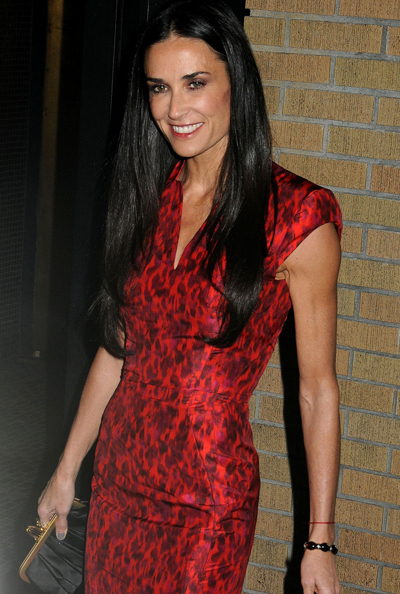 During their five years of marriage, Demi Moore and Ashton Kutcher were prolific Twitter users. (Ashton even once used the social media site to send Demi a “love wave.”)

So, it’s kind of surprising that even after the actress filed for divorce last month, amid allegations that her 33-year-old Two and a Half Men star husband cheated on her, Demi Moore is still sporting a “MrsKutcher” Twitter handle.

However, rather than just change it, Demi recently released a somewhat angry-sounding comment on the subject:

“changing my twitter name isn’t a top priority right now. sorry it bothers so many of u. should I not tweet until I do? does it really matter?” she Tweeted.

Could it be that she’s waiting for the “DemiMoore” Twitter handle to free up? (It’s currently listed as suspended.) Or, considering that she legally changed her name to “Demi Kutcher” back when she and Ashton first tied the knot, is she simply overwhelmed with all of the other accounts and legal documents that she will need to change her name on that her Twitter account truly is the last thing on her mind?

Ironically, “Moore” is not Demi’s maiden now; it’s the name of her first husband, Freddy Moore, that she adopted as her professional name. So there’s always a possibility that she might just hang onto “Mrs Kutcher” for the foreseeable future.

Personally, we think Demi should be more concerned about her daughter Scout’s penchant for buttless chaps more so than her personal Twitter handle.