Demi Moore Steps Out On Solo Date Without Ashton Kutcher 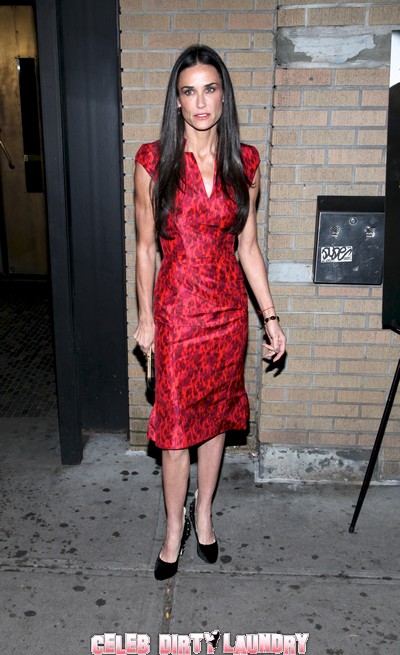 Demi Moore had a night for herself when she attended Sarah Silverman’s comedy show in Los Angeles without Ashton Kutcher anywhere in sight.  Although she was wearing her wedding ring at the Thursday night show the absence of her husband stood out.

TMZ reports that a source at the show said Demi appeared to be having a good time and was laughing and hanging out “like a regular person.”

Last time we checked Demi was a regular person, albeit with lots of plastic surgery, and loads of marital discord.

In light of Ashton’s release Friday of his ‘honesty and responsibility in the media’ rant we have to wonder how much more scandal his relationship with Demi can sustain? After all, how happy can Demi be with party girl Sara Leal prancing around giving details of her sex-capades with Ashton?

Demi is very narcissistic and prideful – she recovered from being rather awkward and unattractive as a child – she was cross-eyed, wore an eye patch, and suffered form kidney dysfunction. She became a big Hollywood star although I say she has very little talent – and at heart she must still be insecure.

How will Demi adjust to the public knowing that her much younger studly husband cheated on her – perhaps frequently.