Did John Edwards Get Engaged To His Mistress Rielle Hunter? 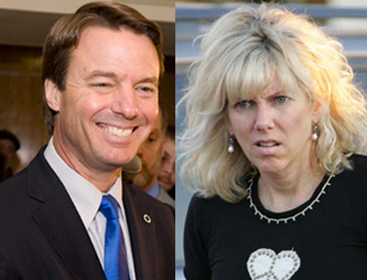 Although a close source to the Edwards family have denied the rumors The National Enquirer is claiming that John Edwards is engaged to his long time mistress Rielle Hunter.   A scant three weeks after his former wife Elizabeth Edwards passed away and his children are still mourning their mother the paper claims he introduced his children to Rielle and got engaged to her.

Edwards had an affair with Rielle when Elizabeth was fighting breast cancer.  The two had a baby girl as a result of the affair.

The National Equirer further reports – “Homewrecker Rielle made a shocking decision – to direct John’s young children to “Call me Mommy!”  The disgraced two-time presidential loser ended the late December get-together by pledging his love to Rielle and promising they would all eventually “become one big, happy family.

The story is going viral around the internet but the source is not exactly creditable.  I wonder if the reason this story has hit is because yesterday news broke that Elizabeth did not leave John anything in her will.  Good for her!  Regardless, I certainly hope the rumors are false.  Come on his ex-wife just passed away and he is already engaged to the women he cheated on her with.  For now this all remains a rumor – if we receive a confirmation we will let you know!