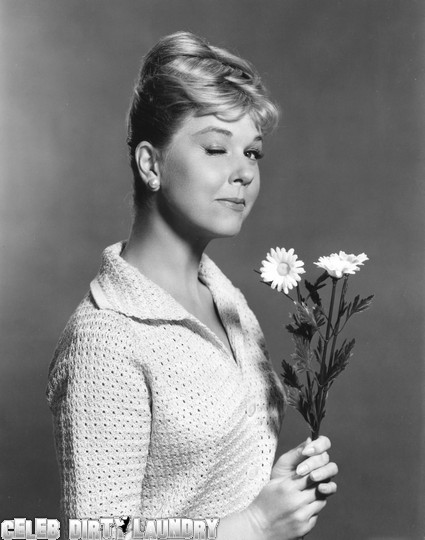 Doris Day the 87-year-old retired actress and Hollywood icon invited Sir Paul McCartney into her Carmel, California, home recently.  Day and McCartney discussed her album, ‘My Heart,’ which includes her covers of songs by Joe Cocker and The Beach Boys.

Day come out of retirement to release ‘My Heart,’ her first collection of new songs in 17 years, which includes ‘Happy Endings,’ a track her producer and musician son Terry Melcher performed.

Day revealed Melcher wrote the song for her, but she begged him to record it instead.

When McCartney asks Day about her son, who died in 2004, she says, “I miss my Terry every day. But…I’m so happy that he’s singing on the album. I used to hear him sing and he should have done more things. I get mail from his friends all the time saying he had so much talent and he was always laid back. He didn’t push himself. He was such a good guy and I loved him dearly.”

McCartney responds: “I knew Terry a little bit in the Sixties and he was a really nice man. But you were right—he didn’t push himself. I didn’t either though, come to think of it. He was a lovely boy.”

Melcher passed away at the age of 62 after battling melanoma.

Day retired more than 30 years ago to found the Doris Day Animal Foundation in 1978.  McCartney told Day, “I wasn’t quite sure what to expect [with your new album], because I knew you hadn’t worked in show business for awhile as you’ve been looking after your animals. But you seem so perky and I feel that spirit in the album. I think it’s very beautifully sung.”

“I think your fans will go crazy with it,” McCartney told her. “It’s a nice album with beautiful emotions.”