Dr. Dre And Eminem Set To Bust Out Together At Grammys 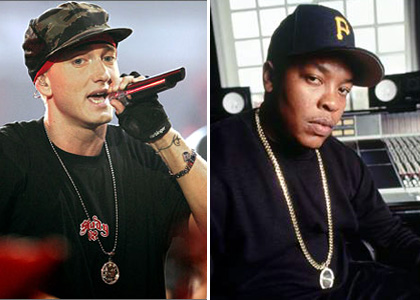 Dr. Dre and Eminem are all set to wow the audience together at the Grammys this weekend.

Dr. Dre, who was simply Andre Romelle Young, before he became one of the multi-millionaire gang of gangsta rap founders, is getting back into the performance part of business after years spent in the background running the show.  What better way then with his protege and most popular rap star of all time, Eminem?

Eminem is all set to glow at the annual music award show as he’s up for 10 trophies, including Song of the Year for ‘Love the Way You Lie,’ Best Rap Album and the coveted Album of the Year trophy for ‘Recovery.’

Everyone will be excited to see Dre and Slim perform together especially since Dre hasn’t sung on live TV in a decade – will they cover their own new release ‘I Need A Doctor?’

Dre’s re-emergence as a performer is a big thrill for hip-hop fans who have been waiting for a new album from the Doctor for over 12 years.