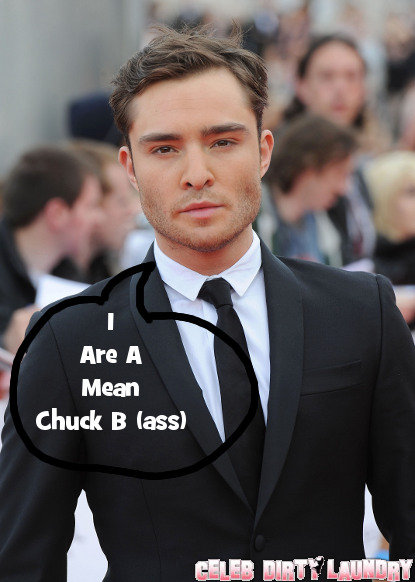 A drunken Ed Westwick and all of his douche-bag-y-ness has reportedly caused yet another bar fight. Sources say that the actor, most famous for his role as Chuck Bass on the popular show Gossip Girl, served as the catalyst for the fight after drinking too much tequila and insulting — yeah, insulting — a fan (technically, the people who make super stardom possible).

The fight went down at the Zinc Bar in NYC. People at the bar prior to the fight said that the actor had been knockin’ back shots before a young woman (probably swooning over his Ed Westwick-ness?) approached him. He was said to have insulted the young woman with a poison-laced “Get outa’ here!” No please? No thank you? How rude!

After replacing the bar’s iPod with his own and forgetting to turn on any music, customers of the bar shouted “Turn the music back on!” He screamed back “Who the [CDL is WAY too classy to write the expletive he used] are you!” The people in the bar asked him to chill, you know, just take it down a notch, but the wasted actor refused with another “Who the [bleep] are you?“

Westwick was said to have insulted another female at the bar, who politely asked him to leave, to take his sloppiness somewhere else. The vulgar replies continued, until the woman’s husband stepped in, asking the actor to meet him outside. Big tough guy Ed accepted the challenge and met the man outside on the rainy NYC sidewalk. I actually don’t know if it was raining, that’s just how I imagine all gritty bar fights going down — in a back alleyway with angry rains crashing down from the sky and people yelling “What did you say to me, huh? HUH!”

The two proceeded to take part in a shoving match; no fists (how boring and terribly anticlimactic) were thrown. This might shock you, but his publicist denied any wrongdoing on the actor’s part.