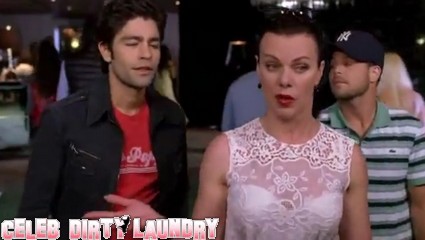 Entourage is back tonight with the fifth episode and it is called ‘Motherf*cker.’  On last week’s episode Ari hooked up with his old flame and rival Dana Gordon, but wasn’t satisfied with that, and felt compelled to rub it in his wife and her new man Bobby Flay’s face.  Ari took Dana to Bobby Flay’s restaurant in the hopes that Bobby would see him with Dana, and maybe go home and tell Ari’s ex-wife about it.  Ari was hoping it would make her jealous.   Bobby knew exactly what was going on, and Dana was no fool either.   To find out what else happened last week catch our RECAP of last week HERE!

Tonight’s show begins with Vince, Turtle and Shauna.  Vince has an interview with Vanity Fair.  Shauna tells Turle it is about Vince today and not about Turtle’s new restaurant venture.  They are meeting Sophia from Vanity Fair and she is a pretty blond with a British accent.  Sophia tells Shauna she can’t stay.  Sophia wants to talk to Vince about him.  Vince is flirting with Sophia and not really being very serious.  She is asking questions about his family and Vince continues to flirt with her.  Sophia leaves abruptly.  Shauna feels like the interview was a disaster because Vince did not answer questions he just flirted and asked her Sophia out.

Meanwhile over with Drama.  Drama is not happy with the replacement of Andrew Dice Clay.  Eric said he called Dice Clay and he said his foreskin was more loyal than Drama and the guys.  Eric is meeting with Sloan’s ex step- mother Melinda.  They guys cannot figure out why.  Sean and Drama think he is meeting with her to try to get Sloan back.   Melinda claims she is coming to Eric because she wants to go back to work.   She feels Terrance, Sloan’s father hurt her career.  She wants Eric to manage her.  She tells him she is focused to get her career back on track.

Mrs. Ari and the kids are coming to see Ari.  Ari’s daughter is complaining because they are going to Disney Land.  Mrs. Ari is leaving and Ari wants to know why.   Babs shows up and says she needs him.  Dana Gordon is coming in because Taylor Lautner is coming in.  Ari calls Dana to tell her he does not want the meeting to be weird.  He tells her if this is an excuse to see him it is bad thing.  Ari tells his kids plans have changed they are going to the zoo and tells his daughter Taylor Lautner is coming in she is excited and tells Ari she loves him.

Over at the studio with Drama and the replacement for Andrew Dice Clay is rehearsing with him.  The replacement is telling Drama he has a problem with Drama’s lines.  Drama is pissed.  The guy says he is just trying to make it work.  Drama tells him he sucks and stomps out.  Drama tells Billy if they don’t get Dice back that the show will suck.

Ari, Dana and Babs are reading scripts and Taylor Lautner has decided not to show up.  His kids are pissed because they have not left.   Then his son looks at Dana and says: ‘ are you the Dana my Mom hates?’ Dana says she has to leave she is upset because his kids hate her and his wife hates her.  She says she has to leave because she cannot separate what has happened but she is going to buy the script. anyway.  Ari is confused because she has not read the script and Dana tells him she is the studio head and she can do what she wants.

Sean is asking Eric if he wants Sloan back.  Eric swears NO and Sean says lets move on.

Turtle is reading up on Sophia.  Vince calls her and tells her Shauna was not happy with the interview and he apologizes and says he was nervous.  He invites her to his hotel.  She says she does not think it is appropriate because he was propositioning her.   He says he was not,  he was actually nervous.  She asks him if he will answer all her questions if she comes and he swear he will.

Meanwhile Drama shows up at Andrew Dice Clay’s house.  He tells Drama if he has not walked off the set he does not want to talk to him.  Drama tells him the show he cares about may go up in flames because of him.  Andrew tells him his son got accepted to Princeton and he cannot afford to go back to the show.  He is going on the road seven days a week to pay the tuition.  Drama offers to give Andrew part of his salary.  Andrew says he appreciates the offer but he is waiting for the network to pay him.  He tells Drama he will never forget his offer.  But he knows what he should get and he is waiting for it.

Over with Eric and Melinda she tells him she wants to get her career back on track.  She asks him why he and Sloan broke up, she asks if Sloan cheated on him.   He tells her Terrance (Sloan’s Dad) asked him to sign a prenup.  She tells him that he is a sweet guy.  She tells him if it was not the prenup it would be something else.

Ari is telling the kids he will make it up to them.  Mrs. Ari asks what happened.  Ari tells her he could not get away from work.  Mrs. Ari is upset because Dana Gordon (his girlfriend according to Mrs. Ari) was in the office.  She says this is a perfect example of what he is.  He asks what she wants to do?  She says I already did what I wanted to do, I filed for divorce today.  Ari’s jaw drops…..

Drama is talking to Phil and asking why they don’t get Andrew Dice Clay back.  Phil says the network may not agree with him.  The network sees Drama has the person who the show is around and who will carry the show.  Drama says he is not buying it they need Andrew Dice Clay.   He knows what he has to do.  He tells Phil he is walking too…

Sophia is at Vince’s house interviewing him she is asking him tough person questions about his family.  She is questioning him about his father who walked out on his family.  Once she is satisfied she thanks him for the interview and then he asks her out for a drink.   She tells him she takes her work seriously and it would not be appropriate and she leaves.   Once she is gone Vince tells Turtle she loves her!

Meanwhile Belinda and Eric are getting drunk.  I see a romance here.  Next thing we see both of them in bed and the phone rings and it is Sloan and she is asking if he is meeting with Melinda.  She tells Eric that Melinda e-mailed her Dad that she was going to sleep with him.  Eric confronts Belinda and she admits it and says ‘but you are still going to be my manager right’

Poor Ari is drinking and is pretty much drunk.  The phone rings and it is Dana Gordon and she wants to know if he is okay.  He asks what she can do.  She tells him she can come over.  He tells her he cannot take a revenge F**K.  She tells him she is lonely and she is ready to take a chance with him.

So what did you think of tonight’s show?  Do you like Ari with Dana Gordon?  I think they are better suited?