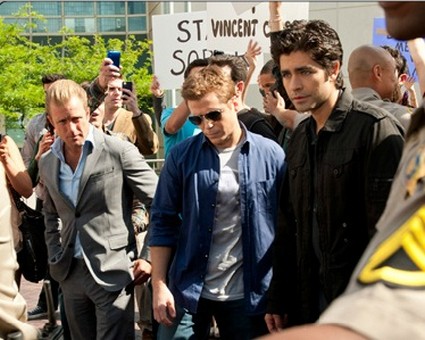 The first 3 episodes of Entourage have been great!  Last week’s show show began with Vince addressing a meeting of drug abusers. The show ends with Vince and Turtle dealing with a dead man, Drama’s new show is up in air since Andrew Dice Clay has walked and their is a so so replacement, Ari has bounced back from his post-separation blues with Dana Gordon and E is trying to manage the careers of Vince and Drama.

Tonight’s show called “Whiz Kid” begins with Vince finding himself at a crime scene.  Vince is upset because he wishes he could have helped Carl not shoot himself in the head.  The police want Vince and Turtle to go to the station and make a statement.  Drama tells Vince he is not going anywhere until he finds a lawyer.  Vinnie says he has nothing to hide, but Drama insists he lawyers up.

Over with Ari and Dana they are still in bed and Ari is telling her it is the longest he has ever left his ‘Berry’ off.  They both commiserate over how many messages they have missed and Ari suggests they forget about them and stay in bed all day.   They both get a call and by their reaction ‘Shit’ I suspect they find out that Vinnie was at a crime scene where someone died.

We are over at the precinct and Vince is there with Turtle, Ari and Eric.  They tell Vinnie he may need to do a drug test because there was cocaine on the scene.  Vinnie swears he did not touch the drugs in the house.

Eric is driving Vinnie home and he tells Eric he has to talk to him.  Eric pulls the car over and he tell Vinnie to tell him.  Vinnie tells Eric that he smoked a joint a week before.    Vinnie tells him he cannot take a drug test.  Eric asks how much he has smoked and Vinnie swears that he only took 2 puffs.  The guys go to great lengths to make sure he passes a drug test.  Like drinking a bottle of vinegar etc etc.  Eric comes and tells them Vinnie will be tested at 7PM in four hours.  Vinnie is freaked out and leaves to see Billy.  Billy is telling him a sure fire way to beat the drug test.  He tells Vinnie they have to leave because whatever they are going to do is going to take one hour to install.   hmmm wonder what it is.

Vinnie and Billy are in the elevator on the way to the drug test and  Billy is telling him not to panic.  They get out of the elevator and the boys are there.  They tell him they are there to support him.  He asks Eric to come in the bathroom with him and he tells Eric that he promised to tell him everything.  Vince then tells Eric he has a fake penis with pee.  Eric gets totally pissed and tells Vince this is a mistake and if he walks in with it he is going to throw his whole life away.

In the wake of the sour “couples therapy” Ari gets back at Mrs. Ari by asking Dana Gordon to Bobby Flay’s restaurant for dinner.  Dana and Ari are having dinner and Bobby Flay walks out and asks Ari what he is going there.   Ari gets upset and Bobby leaves and Dana wants to know what is going on.  Dana is pissed at him she feels Ari used him.  She walks out on him and tells him to forget it ever happened.

Mrs. Ari calls Ari and she is pissed because Bobby told her that he was with Dana Gordon and she is not happy about it.

The guys are back at the hotel and the guys are telling him all will be okay.  Ari walks in and Eric tells him Vinnie may fail the drug test.  Ari tells him they will lose the movie.  The phone rings and Vinnie gets it the test with negative and he is good.  The guys are happy and they are ready to move on.  Eric realizes that Vinnie used the fake penis.  Vinnie admits he did, the guys asked what he did.  He pulls out the fake and throws it at Drama, Vinnie and Turtle and the show is over for the evening!