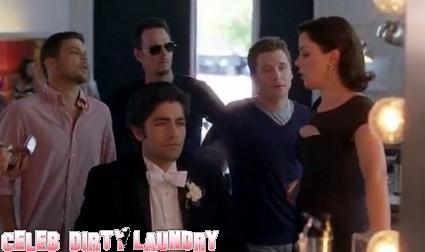 On last night’s episode of Entourage it looks like Ari’s marriage is over.   Mrs. Ari was none to happy to find out that Dana Gordon was in his office.  When Ari brings the kids home after an unsuccessful day with him she gives him hell.  When he asks what she wants to do?  Mrs. Ari tells him she has filed for divorce.   Ari reacts by getting very drunk.  If you missed last night’s show catch our recap HERE!

In the preview for this week’s show ‘The Big Bang’  it looks like Ari and Mrs. Ari have little hope of a reconciliation.  When Ari goes over to the house he finds Bobby Flay there who says to him ‘I’m not hiding Ari’ to which Ari replies ‘well you should, from this point on we are going to let the lawyers handle it’

Meanwhile the guys are speculating as to whether Vince got the cover of Vanity Fair and Shauna tells them that is what they are hoping for but it depends on what they think of his article.  It looks like Vince does not think much of the article and he says “this is garbage.”  Next will be about Vince dealing with the fallout of the interview.

It also looks like Drama walking off the show in support of Andrew Dice Clay is going to be longer than the 24 hours he first said it would.  It also looks like Eric is getting cold feet about managing Belinda, Sloan’s ex step-mother.

The episode airs Sunday August 29th on HBO don’t miss it only three more episodes to go until it is all over!