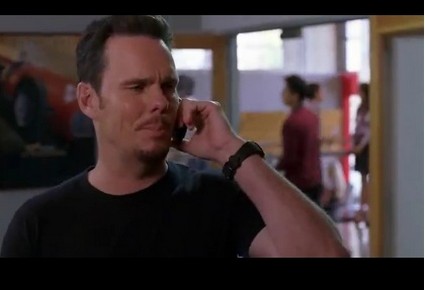 Entourage is back tonight with the sixth  episode and it is called ‘The Big Bang’.   Only two more episodes left!  On last week’s episode Vince falls for a woman he can’t have at the expense of his career. Drama grows a set in order to save his series, which could be as big as the Flintstones, South Park, or The Simpsons, E takes on a new client his ex fiance’s step-mother Melinda Clarke.   Ari’s life take a major turn as Mrs. Ari files for divorce.  If you missed the show catch our recap HERE!

Tonight’s show begins with Drama asking Eric if he thought it was a good idea to bang Sloan’s step-mother.  Turtle is asking what he was thinking and Vince says there is my motherf**ker. LOL

Vince is at the photo-shoot forVanity Fair.  The boys are wondering if Vince is going to get the cover.  Vince says he is sure he will because the interview went so good.  Shauna gets a copy of the interview it is not good.  Vince is really upset he does not want the interview to go in the magazine.  It basically says he is a shallow womanizer.  Shauna tells him he has gotten the cover but he is not happy.  Vince is going to try to make things right with journalist Sophia Lear.  Vince shows up where Sophia is having dinner and he is upset.  Sophia wrote in her article that Vince uses his charm to sleep with women.   She is pissed he showed up, he leaves.

Turtle meets with his East Coast partners on a new business venture he has flown them all in first class (The Delucas).  His partners show up and Turtle tells him he has them in a hotel, they wanted to stay with Vinnie.   They cannot because Vinnie’s house has burnt down.   His partners seem to be only interested in meeting celebs.  They are meeting and the only thing the chefs want to do it to meet celebs.   They have no time to look at the place (prospective restaurant) because they are going to the Lakers game.  They want to get there early to meet Jack Nickolas.

Ari gets a reality check from his divorce lawyer.  He tells Ari that his wife could apply for custody of the kids.  Ari tells his lawyer he does not want to make the divorce contentious.  The lawyer tells Ari that his wife is entitled to 1/2 his income and the 11 million she put in his business.  Ari says “She can take my kids and my business?”  Ari asks Babs to lend him the money so he can pay his wife back.

Ari shows up at his wife’s house and his lawyer is trying to convince him not to do it.  Bobby Flay is teaching his wife how to cook and kissing her neck.  Doorbell rings and it is Ari.   He tells her he rang the bell he is trying to be respectful.   She tells him they have lawyers and should not talk.   She tells him she can’t talk and he says ‘after 20 years you can’t talk.’  Then Ari smells something cooking and realizes Bobby Flay is in the house.  Bobby Flay comes out and tells Ari he is not hiding.  Ari tells her from here on out they are going to let the lawyers handle it.  He walks out very upset.   The big reveal happen here, Bobby revealed the name of Mrs. Ari… drum roll pls…. MELISSA……

Eric is not picking up Melinda Clarke’s phone calls.  Sean comes in and tells Eric there is a $300,000 red SLS car in the parking lot and it is for Eric a gift from Melinda.  Eric is with Melinda and he is upset.  He feels Melinda sent him a car because of the sex they had.  He thinks that Melinda is using him to piss Terrance off.  She tells Melinda he is her lucky charm.   She tells him he is still worried about Sloan.

Johnny Galecki shows up and Melinda leaves and Johnny sits down with him.  Johnny tells Eric that he had dinner with Sloan the night before.  Sloan is worried that Eric is having sex with Melinda.

Billy is dressed like a pirate at a children’s party and he calls Drama and gets pissed off because the strike/walk out is still on.  Billy has five kids and he needs the money and his check did not come this morning.  Phil told Billy that all checks are held until they figure out what they are doing about the show.  Drama is upset because Billy is not getting paid.  Drama wants to call Phil and Eric tells him it is not a good idea.  Drama is going to show his solidarity and go to the gym and not call Phil.

Lloyd comes to the gym and tells Drama that the network is talking about closing down Johnny Bananas.  He tells Johnny he has to go back to work.

Drama goes over to Andrew Dice-Clays house and he is playing poker.  Drama is upset he tells Dice-Clay they are cancelling the show.  He tells Dice they should go back.  Dice tells them it is already working because management has contacted his people.  Phil calls Drama that he got a call about the movie that Vince wrote that he wants Drama to star in.  He tells Drama if he does not come back to work he will make sure that the movie will never get filmed with him in it.  Drama tells Clay maybe he is a ‘self sabotager’ like his therapist says.  He hangs up on Phil.

Vince is beating himself up because of the things Sophia wrote about him.  Turtle tells Vince that he is having trouble with the Delucas.  Eric shows up and tells the guys Johnny Galecki is f**king Sloan.  He tells Sean he has to fire him as a client or they are done.

The show is over!  Thoughts?  How did you like tonight’s show?