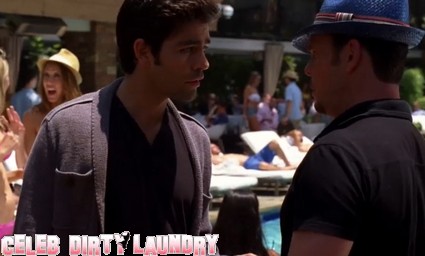 Get you handkerchiefs out because there are only two more episodes of Entourage left in the final season.  Next week’s episode is called Second To Last’ and we have the sneak peek video below for your enjoyment.  On last night’s episode of Entourage ‘The Big Bang’ during his Vanity Fair photo shoot, Vince reads the article for his interview, and sets out to make Sophie change it. Eric gets an expensive gift from Melinda.   Drama faces pressure from Billy, Phil, and Andrew Dice Clay over his going on strike. Ari also faces pressure regarding his divorce.  If you missed the episode catch our RECAP HERE.

Here is the summary for next week’s show:

Vince continues to woo Sophia. The DeLucas fall in love with a pricey restaurant space, forcing Turtle to pitch his investors for more money. Distraught over Sloan, Eric turns to Melinda Clarke and the pair crash Sloan’s date. Ari  makes an emotional connection with the script for Vince and Drama’s  miner movie.

In the preview it looks like Vince is determined to make the miner movie and he tells Drama ‘You wanna be in front of the cameras’ and Drama replies ‘Yes’ and then Vinnie tells him they are making the movie.  Ari also admits to Dana Gordon that he still loves his wife.

How are you enjoying the show?  Is it living up to your expectations?  Sound out in the comments below!