Globe: It’s Official! Kate Middleton Is Having A Baby Girl 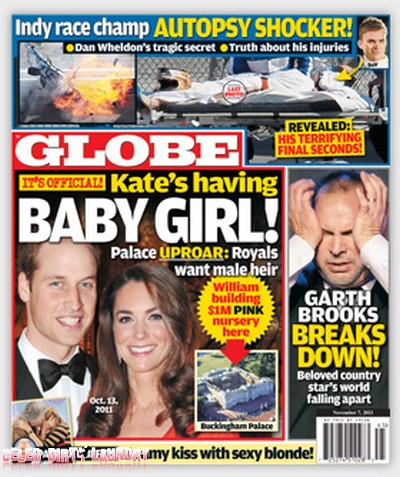 The October 31st, 2011 cover of Globe Magazine features the cover story ‘It Official!  Kate’s having A Baby Girl’  The magazine claims that the palace is in an uproar because of course girls are no good they want a make heir.  They go on to claim that Prince William is building a $1 million pink nursery and they have the pictures!

Globe Magazine has more: PRINCE WILLIAM and his beautiful bride Kate are hiding bombshell baby news, and GLOBE has the world exclusive. She’s having a girl – to the fury of other royals! Read the bizarre way Kate learned about her little princess and why not everyone in the palace is overjoyed – all in this issue of GLOBE.

Not long ago Kate Middleton was being criticized for looking anorexic but now that the Duchess of Cambridge is starting to settle into Royal life and look a little healthier the tabloids have to tell another whopper and claim she is pregnant.  Poor Kate she just cannot win!

All feature in this week’s issue the magazine has all the details of the Garth Brook’s mid-life crisis and what is behind it.  If you need to find out all this and more pick up the current issue of Globe magazine!