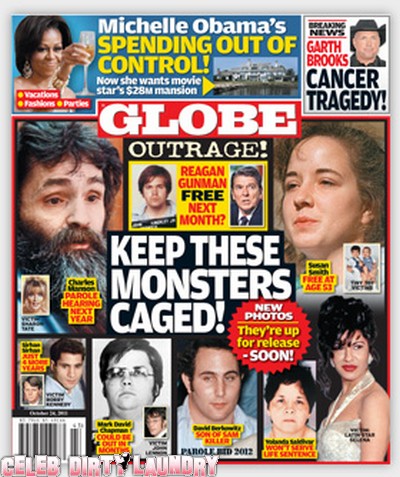 The October 17th, 2011 issue of Globe magazine features the cover story ‘Keep These Monsters Caged’  Several serial killers and killers are set to be released or are coming up for parole and Globe wants to keep them caged.  The also claim to have new photos.  Charles Manson is up for parole again next year, but I doubt we have to worry about him getting out.  Charles has been denied parole 11 times in the past.  John Hinckley however is under institutional psychiatric care and I doubt he will be seeing the light of day anytime soon.  The probably of the ‘Son of Sam’ ever getting out is slim to none.   The magazine claims the public is outraged, but I am not sure why.  Most of these people will never get out from behind bars!

Globe has more: In a shocking special report, GLOBE reveals that murderous monsters – including President Reagan’s would-be assassin John Hinckley Jr., Charles Mansion and other caged fiends — could be out roaming the streets for new slaughter soon. Read about the upcoming dangers and why experts say these evil creeps should never see the light of day – only in this issue of GLOBE.

Also included in this week’s issue: Michelle Obama‘s spending is out of control at least according to Globe.  They claim while tax payers are out of work and suffering she is living it up and spending money like water.  They go on to claim that Obama is trying to rein her in before the public gets a whiff of the situation.

To read all this and more pick up the current issue of Globe!