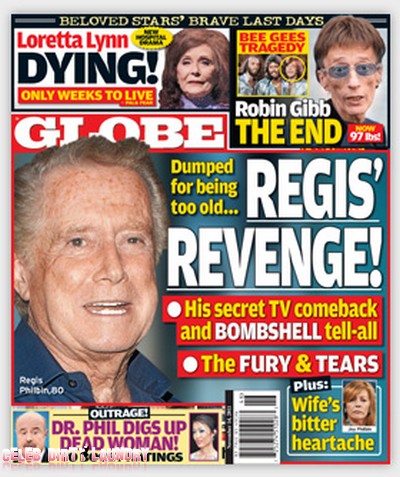 The November 7th, 2011 issue of Globe magazine features the cover story ‘ Regis’ Revenge.’  The magazien claims that the reason Regis was dumped from his television show with Kelly Ripa Live! with Regis and Kelly was because he was too old!  They also claim that regis has a secret plan to make a television comeback and that he is writing a bombshell of a tell-all book.

Globe has the scoop: Bitter at being forced off his hit talk show Live!, Regis Philbin is desperate to get even with his old bosses. Only GLOBE has the shocking reason why he was cruelly dumped and details of his secret plan for revenge – that includes a bombshell comeback with a surprising partner. Read all about it in the current GLOBE.

We recently reported that Regis  came clean and admitted he was fired as we feared was the case back when he announced that he was leaving ‘Live! with Regis and Kelly.  Although he will be on until November 18, it was back in January that Regis made public that he wouldn’t be returning to ‘LIVE! with Regis and Kelly’ – but didn’t say exactly why.  When someone mentioned to him it was a mistake letting him go he responded with typical modesty: “Of course it’s a big mistake, but Regis is moving on.”

As for who will replace him on the show with Kelly Ripa, Regis says they haven’t chosen anyone yet. His personal front-runners are Kelly’s hubby, Mark Consuelos and Bravo host Andy Cohen.

To find out more about Regis’ plans pick up the current issue of Globe!