Hef Has Himself A New Girl–That Was Fast! 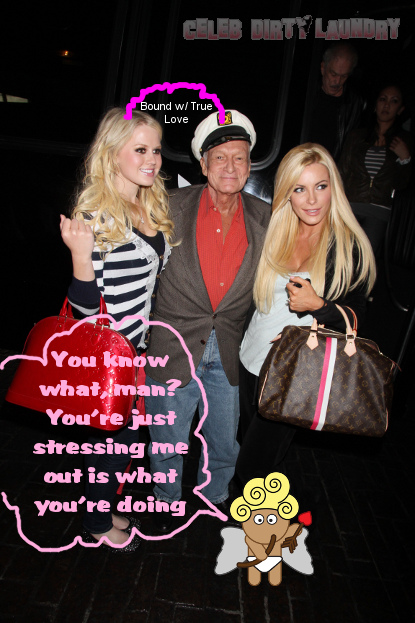 Hugh Hefner, who had, up until recently, been planning on marrying Crystal Harris, has already found himself a new girl. Her name is Anna Sophia Berglund and she’s everything you might expect: blonde, a playmate, young enough to be Hef’s great-great-great-great-great grandaughter, and willing to put up with a Viagra-popping rich guy in exchange for  fame and fortune.

While Crystal was seen partying in Vegas (apparently she isn’t too heartbroken, despite her teary-eyed breakdown on Seacrest’s radio show), Miss January 2011 was seen moving into the mansion. And not into any ol’ room in the mansion. She allegedly moved right into Heff’s room. Why prolong the inevitable, right?

Sources say that the two are already kissing and hugging during movie nights at the mansion and can even be heard calling each other “Babe.” Another source said that “it’s clear Hef has moved on to Anna.”

In the Playboy World — a mysterious realm separate from our own — a heart can find its “soulmate,” be shattered into a million pieces, patched back together, and locate another true love all in a matter of days. All I can say is wow. I can’t say I’m at a loss for words because,  in all honesty, none of this surprises me. I will, however, give this situation 4 out of 5 intense eye rolls . . . 1, 2, 3, 4 eye-rolls-of-disgust.

Does all of this surprise you? I’m guessing it doesn’t, but we’d like to hear from you anyway.