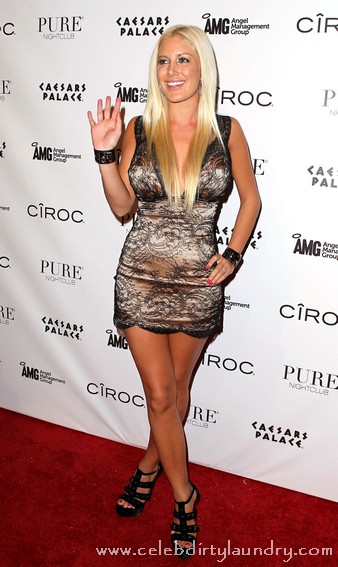 Heidi Montag spent $2 million on an attempt to buy her way into a music career but despite the gross commericalism of pop music today she was rejected.  Now the 24-year-old blonde bombshell who built it all with cosmetic surgery says she has been given a second chance.

Montag said that Deb Antney, mother of Waka Flocka and a successful music manager, has agreed to take her on as a new client.  “Spencer is going into the studio with Waka Flocka Flame, and I requested that his mother Deb Antney meet with me and manage me, because she is just fabulous,” Montag said.

“I spent $2 million on my music career, and it didn’t happen for me, and now I have this opportunity.”   Antney runs the Atlanta-based Mizay Entertainment that boasts hot acts such as Nicki Minaj, Gucci Mane and of course, Waka Flocka.  “I need her to guide me in the right direction and I know amazing things will happen because she really knows what she is doing,” Montag said.

If Deb Antney really knows what she is doing then she will steer clear of Montag!

“While Spencer is working with Waka Flocka, I’m going to do some tracks with Eric Nolan Grant,” Montag said, excited to have the opportunity to work with the jazz singer.  “We are meeting in the studio on February 21st through February 24th, and I am so excited.  I want to make my own niche in the music world, that’s just Heidi. It could be a Pink meets Britney Spears.”

If Heidi Montag makes a commercial success in the music world then I am moving back to Mars.