Hell’s Kitchen Celebrity Stars in his Own Show 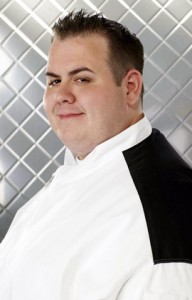 We all know Chef Robert Hesse for his two stints on Hell’s Kitchen with Chef Gordon Ramsey during Season 5 and 6; but now he’s back in his own cooking series “Never Trust a Skinny Chef”.

The series stars Chef Robert Hesse as he takes you down a step by step process in making some top quality restaurant style dishes to some of his signature dishes and even some you’ve seen on Hell’s Kitchen.  Is a food lover’s paradise.

Chef Robert Hesse received his start in the culinary arts thanks in part to Eckerd Academy.  He would later be a contestant on Hell’s Kitchen where he quickly became one of Chef Gordon Ramsey’s favorites to win on Season 5.

A medical condition would keep him from finishing on season 5, but thanks to an overwhelming demand, FOX brought this fan favorite back.  Chef Hesse would finish in the top 5 that season.

“Never Trust a Skinny Chef” can be found online at his YouTube channel, http://youtube.com/user/ChefRobertHesse

There you will see his weekly show bringing you some great dishes your family will enjoy, and teach you to cook like a gourmet chef even if you don’t have the experience.

You may even see a surprise guest from time to time.