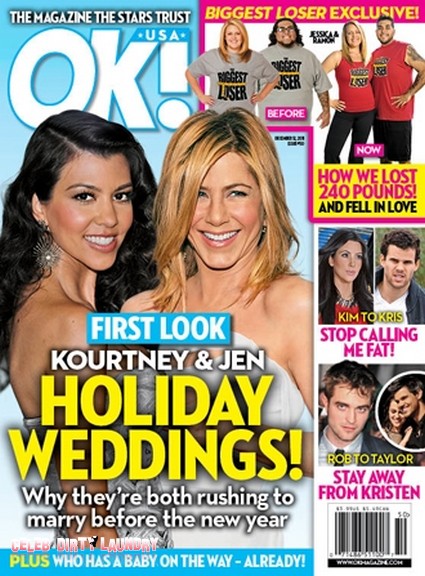 OK! has more: It will probably be late this year,” an insider tells OK!. The pair has famously survived some ups and downs, of course — recently, rumors that Scott dallied with Kristin Cavallari surfaced. But the seas have calmed. “I think everybody probably sees marraige in their future,” Scott tells OK!. “I love Kourtney more than anything in the world. We’ve come a long way. I finally have come to the place in my life where I realize what’s important.”

The magazine claim that Jennifer Aniston is set to elope with her boyfriend Justin Theroux before the end of the year.  Also featured in this week’s magazine they caught up with the  Biggest Loser‘s biggest winners, Jessica Limpert and Ramon Medeiros, who fell in love while losing weight on the show.   Now that Dancing With The Stars has ended OK! has all the details of the weight loss from this season, who has kept it off and who has struggled!

For all this and more pick up the current issue of OK! Magazine!