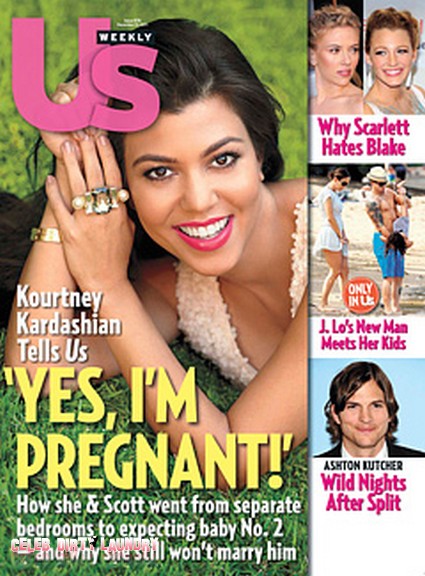 The current issue of Us Magazine features the cover story ‘Kourtney Tells All: Yes I Am Pregnant.’  Kourtney Kardashian, 32, is pregnant again and sat down with the magazine and dished on the details.  This will be the second child for Kourtney and Scott Disick, 28,  who have a son Mason nearly two years old together.  The couple have been dating for five years.

Kourtney apparently took the test weeks ago and then let Scott in on the big news.  Although Kourtney is pregnant with her second child with Scott the magazine claims she still won’t marry him.  They have all the details of how they went from being  living in separate bedrooms to having another baby.  They have all details of how they told the rest of the family and whether they will ever marry.

Also featured in this week’s magazine Ashton Kutcher.  Demi Moore recently announced that her marriage to Ashton was over and the magazine has the dirt on all his wild nights after the split was announced.  For all these details and more pick up the current issue of US Magazine  on stands Friday!