Hollywood Has Baby Fever, Is There Something In The Water? 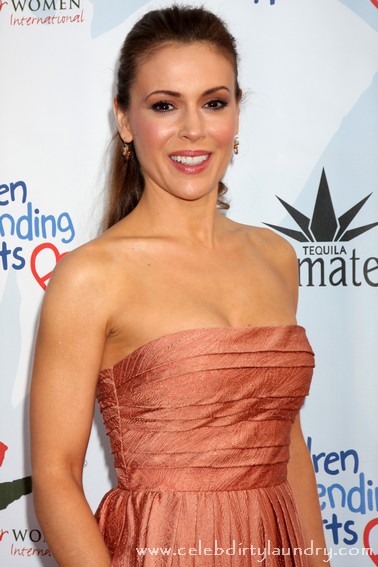 Joining the long list of recent celebs getting on the baby train, former ‘Who’s the Boss’ and ‘Charmed’ star Alyssa Milano just announced that she and her husband of 2 years David Bugliari are expecting their first child.  In an issue posted on People.com, the pair are said to be “over the moon”. Seriously, is there something in the water??  L ast week Jessica Alba announced that daughter Honor was going to be a big sister, and we all know by now (especially after Matthew Bellamy’s Grammy shout out) that Kate Hudson is a few months along – who’s next???   On Tuesday, February 22 Christina Applegate gushed to Ellen Degeneres about daughter Sadie and how “she is the best thing that ever happened to me”. Applegate further went on to discuss her 18 hour labour detailing it as “profound pain”…ummm, 18 hours?  Oh dear god.  Next we have the lovely meat (and everything else) free Alicia Silverstone who stepped out recently with her increasingly expanding baby bump.  The Clueless star and her hubby Christopher Jarecki are due later this year…I wonder what sort of cravings she has?

The sudden barrage of celebs these days announcing that they’re expecting is giving me baby fever!   On the bright side, I suppose that’s better than Beiber fever.  And can we please talk about Posh and Becks?!    All I can say (and pray for, for that matter) is that I really, really hope this time around she has a girl.  I  mean, those 3 gorgeous boys are delicious and they have the makings of a star soccer team, but seriously – can you picture a little Posh baby?    Suri Cruise wouldn’t have anything on her!!    And then there’s the beloved Sir Elton John and David Furnish who earlier this year announced the birth of they’re son Zachary on Christmas Day.  Born from a surrogate, the young lad is said to have been conceived with Sir Elton’s DNA so the little guy “gets his dad’s good genes”. Let’s hope it’s true!  From Celine Dion to John Travolta to Penelope Cruz – it’s no doubt in anyone’s mind that the key to being a success and staying in the tabloids these days is just plain old reproduction…and lots of it.  I am eagerly anticipating the next batch of baby bump broadcasts (that’s a lot of B’s) to hit the Hollywood hills….just remember, stay away from the water if it’s not your thang.

KStew I’m gunning for you!