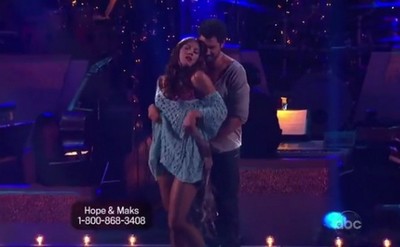 Tonight on Dancing With The Stars the remaining 7 contestants had to dance to showtunes from a Broadway show.   Hope Solo and Professional Dancer Maksim Chmerkovskiy dancing the Rumba.  If you missed tonight’s show you can read our official recap here!

Tonight the judges were did not give Hope favorable comments and Max was not happy and he made it clear to the judges and Len in particular.  Max was so forthright that Carrie Ann scolded him.  When they were waiting for their scores Max basically told Brooke that he was not happy about the scoring.  I have to agree week after week I watch the scores the judges give to some of the contestants and I am amazed.  Good on ya Max for telling it like it is!

Judges comments – Carrie Ann said: I see all the effort you are putting in it. But sometimes you force the move and it comes out forced. It was starting to blossom and then it did not. I saw improvement. Len said: I have never lost faith in you, I always feel there is so much there and for some reason it has not come out. The boots you had on did not help. This was your worse dance of the whole season in my opinion and I am really disappointed. Bruno said: Listen Hope,  look at me, the performance was to a very difficult song because you have to portray so many different emotions. It worked at times but there is a technique, the rumba never stops moving and you stopped a lot. It is not because of lack of effort but it did not gel as well as it could have.

Watch the video below and let us know what you think?  Do you think he will be eliminated tonight?  Sound out in the comments below!