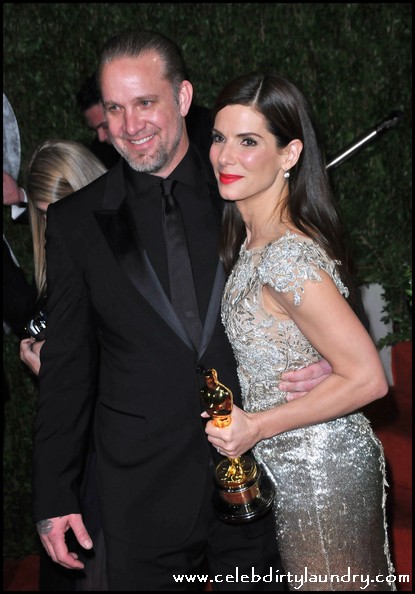 When news broke in March 2010 that Jesse James had cheated on Sandra Bullock, fans wondered how beloved Oscar-winning actress learned of her husband’s betrayal.

In his new memoir American Outlaw the motorcycle mogul, 42, reveals intimate details on perhaps the hardest conversation ever in their nearly six-year marriage.  James writes that he first got a call from Bullock’s publicist warning that his mistress, tattoo Michelle “Bombshell” McGee, had sold her story of their affair to a tabloid.

Coming clean during a a conversation with Bullock, 46, in his West Coast Choppers office, “I admitted the affair,” James writes. “I told her the hard details. I let her know that I had never loved this woman, that I had never cared for her at all.”

Can you believe that Jesse James would expect anybody to fall for his crap? What an a**hole.

What came next was devastating, he says. “The feeling of shame and sadness that washed over me as Sandy began to cry was almost beyond measure…I didn’t touch her. I sat frozen in my chair, watching, as Sandy’s small body shook with sobs.”

Once the confession was over, a distraught Bullock then “rose to her feet. She unfolded her sunglasses and put them on her face…She walked steadily and purposefully to the front of the shop, opened the heavy, metal door. For a moment, the sunlight enveloped her. The door closed behind her, and she was gone,” James writes.

How did James who now engaged to Kat von D, who is set to be his fourth wife, explain his then-wife’s absence to his youngest daughter Sunny, 7, with whom Bullock was close?

“I chew my lip as I consider my answer. Well, sweetie, the truth is, I have no idea. Daddy f**ked up, real, real bad, so your stepmommy decided to disappear for a few weeks,” James writes.

During a Wednesday appearance on Good Morning America, James defended writing about the very private matter in his book and about hurting Sandra.

“I can’t worry about her anymore,” he said. ” I think I spent a lot of the past 5 or 6 years worrying about her….its time to make sure I’m happy.” He and Kat von D plan to wed this summer, he added.

As for Sunny and Bullock’s relationship, he revealed that Bullock and her former step-daughter haven’t seen one another in months. James himself hasn’t seen Louis Bardo, the little boy Bullock adopted last January, since “everything happened.”

Let’s just call it for what it is Jesse James is simply a total putz.