Hugh Hefner Consoles Himself With The Shannon Twins 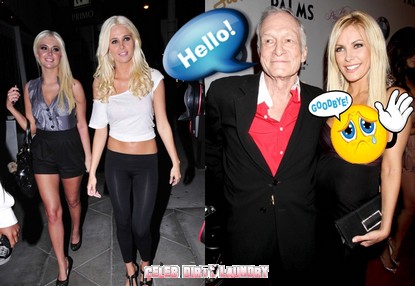 Hugh Hefner is consoling his broken heart with The Shannon Twins.  Playboy founder Hugh and Crystal Harris were all set to get married this Saturday, June 18th, but the wedding was cancelled.  There have been many rumors as to why the wedding was cancelled but it does appear that Hugh was surprised that Crystal did not want to go ahead with the wedding.   After all he is such a catch :-)

Gone is Crystal and in moves Karissa and her twin sister Kristina Shannon.  The twins are moving back to the Playboy Mansion so I am betting it is helping to repair Hugh’s bruised ego.

TMZ has the scoop: We broke the story this morning — Karissa pulled a bait-and-switch on the “Smallville” actor yesterday, lying about moving back into the Mansion with her sister … so Jones would help her pack before she dumped him.

But something changed in the last few hours — because the twins just rolled up to the Mansion, telling us, they’re moving back into Hugh Hefner‘s palace after all.

More: Crystal Harris Speaks Out — Why She Left Hef

The girls use to live with Hugh in 2008 as his girlfriends.  I guess Hugh is showing Crystal he can get two girls instead of her :-)  I wonder if those rumor are true that Crystal “The Runaway Bride” ran to Dr. Phil’s son?