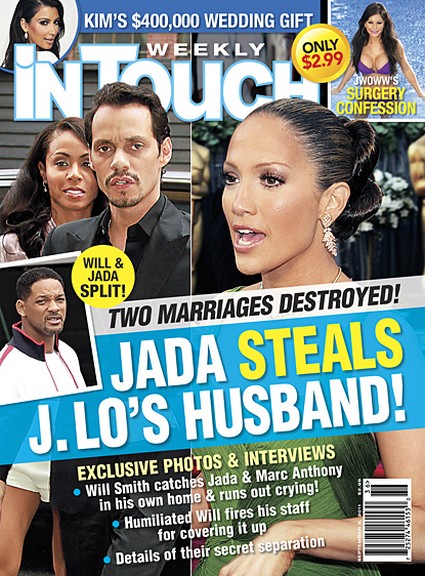 In the current issue of In Touch Weekly they have exclusive photos and interviews and the behind the scenes story of how ‘Two Marriages are Destroyed.”  The two marriages in question are the Smiths  and the Lopez/Anothonys.  Yesterday news broke that Jada Pinkett Smith and Will Smith were divorcing but the couple denied the rumors.  Today In touch is claiming Jada Pinkett stole Jennifer Lopez’s husband Marc Anthony.

In Touch Weekly reports:  For months, an insider says, Will had been harboring suspicions that Jada had grown “uncomfortably close” to her HawthoRNe co-star and their friend Marc Anthony, who was still married to superstar Jennifer Lopez. “Will expressed worry to some close to him that there was more than just on-set chemistry between Jada and Marc,” the insider tells In Touch. So when Jada told Will she needed space and moved from their Malibu mansion into their Hidden Hills estate — and began spending more time traveling without the family — Will grew increasingly paranoid. In early August, he decided to confront his gnawing doubts about Jada and made a surprise visit to his wife. And, sadly, his suspicions were seemingly confirmed. “He left crying,” the insider confides to In Touch. “He was very upset. He said Marc was with Jada.”

Jada’s rep released the following statement: “All the rumors regarding Marc Anthony and Jada are false. Completely untrue. As for Will and Jada, I’m not commenting on their personal life.”

Marc’s rep added, “We unequivocally deny this. Enough is enough. There are families involved, children involved, friendships involved. This is NOT true.”

It is horrible for the magazine to come up with rumors like this.  There are children involved who will be hurt by these rumors.  Tabloids today will go to any lengths to sell a story!