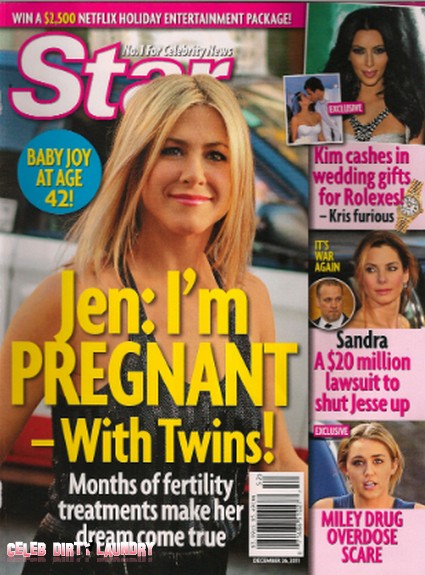 The current issue of Star Magazine features the cover story ‘Jen: I’m Pregnant – With Twins.’  The magazine claims that after months of fertility treatments Jennifer Aniston’s dream of becoming  a mother has come true.  There have been rumors so many times in the past couple of years that Jennifer was pregnant she could have a baker’s dozen by now.  Jennifer who was recently voted the hottest women of all time is dating Justin Theroux for just under one year.

A friend close to Jen revealed to Star, “She’s been taking fertility drugs, which can lead to multiples.  Jen thinks she’s having twins.  Jen was sure early on that Justin was The One, so they’ve been trying for a baby for a while.  Jen felt that there was no reason to wait.”

“Jen definitely looks pregnant,” a neighbor told Star. “My kitchen window overlooks a bedroom in Jen’s house, and I see her changing clothes from time to time. She seems to have a baby bump — it’s more than just a bloated belly.”

In August 2011 Life & Style had a world exclusive that Jennifer was pregnant with twins after ongoing fertility treatments.  So that would make her just about to give birth.  Funny thing is she barely looks pregnant.

A rep for Aniston tells Gossip Cop the report is 100% “not true,” even mocking the magazine by joking that she’s really pregnant with “triplets.”