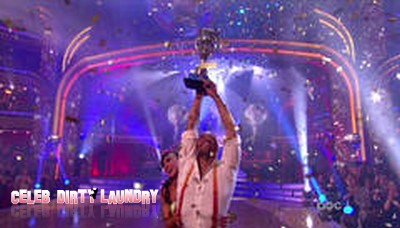 J.R. Martinez has won the ‘Dancing with the Stars’ competition and the war hero is a most popular winner. While Rob Kardashian actually seems to be a nice guy – making him the only one of the Kardashian-Jenner clan we can stomach, it is hard to beat a war vet who has recovered from terrible injuries.

The Iraq war veteran and his professional partner Karina Smirnoff and runners up Rob Kardashian and Cheryl Burke each received full marks from the judging panel for their final routine – a samba to Ricky Martin’s ‘Shake your Bon Bon’ – last night but Martinez took the title after winning the public vote, which counts for 50 per cent of the contestants’ total score.

Upon hearing the news, Martinez said: “First and foremost, I want to thank everybody who voted for us for 10 weeks. Thank you America for believing in us.”

He went on to pay tribute to Karina, who was experiencing her first victory on the ballroom show.  The ‘All My Children’ star said: “You are amazing, and I’m so grateful that I was able to be part of your first mirror ball trophy.”

Earlier in the evening, there was a shock when Ricki Lake and Derek Hough were eliminated after the first round, despite winning 30 additional points and topping the leader board with the judges’ scores.

Despite her disappointment, Ricki, 43, expressed her pride in her success at the competition.

She said: “I’ve loved basically every minute of this. I’ve done something that I really didn’t think I could do and for someone who is a middle-aged mom, I hope I made my children proud, my fiance and my family.”

Rob also insisted he wasn’t disappointed not to win the competition.  He said: “I’m super-thankful. I definitely am not sad. I won in my book.”

What did Kim Kardashian think? Did she actually want Rob to win? Does she want more attention now – when she is reeling from the backlash against her caused by her flippant and hasty divorce from Kris Humphries?

Sound off in the comments below.