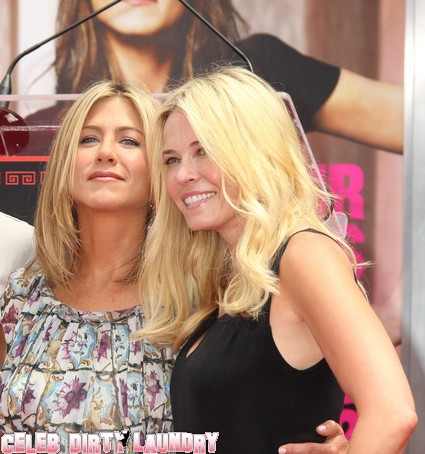 Jennifer Aniston is not the person you want to rely upon when the going gets tough. Her former best friend Chelsea Handler is learning the hard way that Jen can not be counted on.

Chelsea’s sitcom, ‘Are You There, Vodka? It’s Me, Chelsea,’ is getting killed in the ratings and Chelsea naturally assumed that her pal would be ready to help. No such luck for Chelsea as Jen has refused to do anything other than a brief cameo performance to help the ailing show.

Our inside source reported: “Chelsea’s hurt – she’s taking Jen’s ‘thanks, but no thanks’ as a real slap in the face.”

According to industry sources, the ‘Chelsea Lately’ host is “facing a disaster” with her new show after three main stars were axed before production even started.

“The pilot episode was a bomb – it wasn’t funny and the characters were unlikable,” the insider revealed. “Now they’ve decided to recast and go in a new direction. And Chelsea’s tearing her hair out trying to save it.”

The semi-autobiographical show is based on 36-year-old Chelsea’s bestselling 2008 book of the same name and features ‘That ’70s Show’ star Laura Prepon as Chelsea in her 20’s.

Chelsea plays her frumpy older sister but she’s now struggling to come up with a different supporting cast and a fresh story line. No doubt that having popular superstar Jennifer step in would guarantee the show’s success but Jen is unwilling to lower herself and do TV.

The source says that “Unless it’s a cameo role or a turn as a director of one of the episodes Jen is out.”