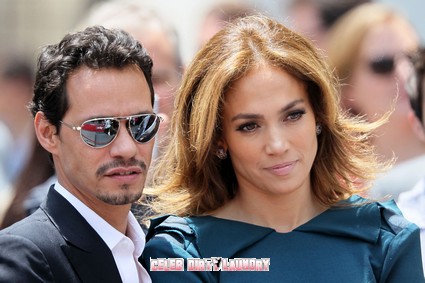 The gloves are off in the Jennifer Lopez, 42,  and Marc Anthony, 42, divorce.  Apparently the two are ready to do battle over the $250 million dollar fortune she has.  When Jennifer and Marc married in 2004 they signed no prenuptial agreements because of course they never thought their marriage would end.  So Jennifer may have to fork some off her fortune over to Marc.

National Enquirer has the scoop: “And even though the macho singer is worth about $60 million himself, insiders expect him to go after Jennifer’s much larger bank account. There was no prenup­tial agreement when they got hitched in 2004, so she could be on the hook for as much $125 million.  But her attorneys will undoubtedly argue that Marc made tens of millions himself and that she shouldn’t have to pay a dime.”

Rumor has it the marriage broke up because Jennifer could not take any more of the fighting in their marriage.  When Jennifer signed to do another season of American Idol and a summer movie she was defying Marc and that was the end of their marriage.    Marc’s career is no where near  Jennifer’s and Marc was apparently jealous.  Marc wanted Jennifer to do a reality show with him so he could boost his career.

Marc has more problems in the future he is said to owe the IRS $3.4 million in back taxes and he could go after Jennifer to help him pay for it.  The battle is about to begin!