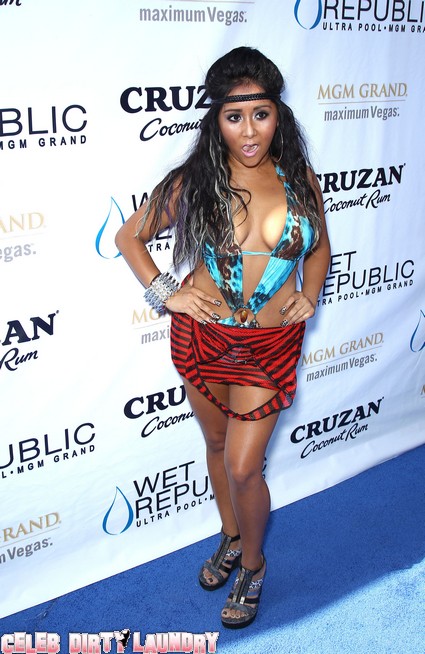 The Snookster and her on again off again boyfriend Jionni LaValle were partying their butts off in Las Vegas.  Jersey Shore’s Snooki was hosting a pool party at Wet Republic in the MGM Grand hotel.   After partaking in everything the bar had to offer Snooki was up to her usual drunken antics.  The orange gnome never one to miss a photo opportunity jumped up on Jionni and put her legs around his waist.  If that was not enough she decided to flash everyone by pulling  down her dress to show her bathing suit.   Snooki looked like one COLD mess!  Remind me why she is famous again?

Jionni and Snooki took a two month break from their relationship because Jionni had trouble trusting Snooki because of her wild ways.  They decided to give it another try in early August.   The two have had a volatile relationship since they began dating.  With her drunken ways I am betting Jionni won’t be around long!