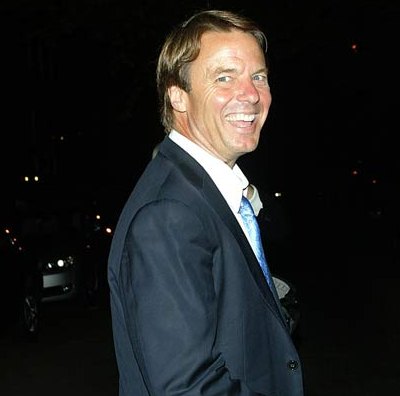 Earlier today, we reported that John Edwards was rumored to have proposed to his mistress Rielle Hunter. Now, not seeming to want to perpetuate the entire douchiness of how that sounds, John is denying the engagement rumors.

It was said that after John’s wife Elizabeth passed away, he asked Rielle to be his wife. Yes, because now that the pesky old wife is out of the way, he can marry his mistress…..right? Ugh. This just sickens me. But why didn’t he get divorced from Elizabeth? He thought it would be faster to wait for her to pass away? And cheaper, perhaps?

At a recent event, his spokesperson denied the reports of an engagement, as first reported by the National Enquirer. She said, “I can tell you that it’s not true.”

Of course it’s not true. And neither is the fact that he cheated on his cancer-stricken wife and had a baby with some crazy reporter chick. — All of which were also first reported by the Enquirer. Coincidence, no?