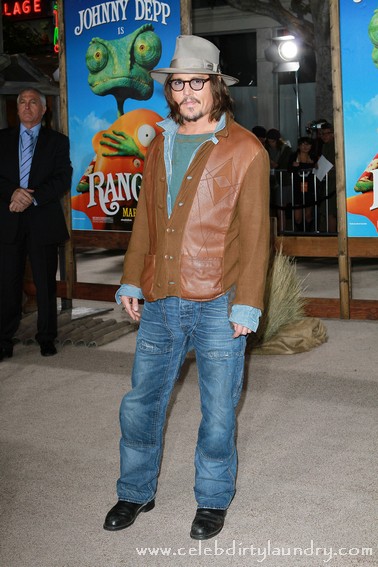 Johnny Depp and Isla Fisher,35, both arrived solo as they walked the red carpet at the  Los Angeles premiere of their new animated movie “Rango” .  The premiere was held at The Regency Village Theatre in Westwood, California February 14th , 2011.

Johnny manages to dress scruffy and casual in jeans and still look sexy, while Isla wore a blue strapless mini-dress.

In an interview promoting the movie Johnny said: “I think kids, as an audience are the way forward,”   “Because they are not sullied by intellectual expectation, it’s a very pure kind of response to the work…I trust kids far more than I do adults.  Kids give their honest opinion.  They tell the truth.”

Isla voices the character of Beans in the animated film alongside Johnny Depp, who takes on the title role of Rango, a common chameleon.  Are you exited for the movie?  Will you go see it?