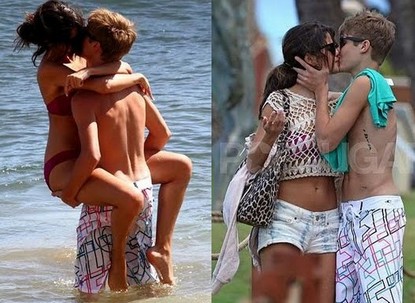 Justin Bieber and Selena Gomez got down and dirty in the surf while in Hawaii this week. The baby faced singer enjoyed a romantic time with girlfriend Selena Gomez.  Sweeping Selena, 18, up in his arms, as she clung to his waist, he embraced her in full view of other beach-goers.

The pair then enjoyed a splashing contest, before showing their adventurous sides with a jet-ski ride.  But the holiday isn’t all romance for the youngsters – both are accompanied by their parents, who were elsewhere as they enjoyed their trip to the beach.

The pictures are so popular that Justin and Selena are now trending on twitter, world wide.  The reactions are mixed by Beliebers some think the pics are cute while others are furious.

As Justin cavorted with Selena, he revealed his two tattoos.  One, on his stomach, is the outline of the seagull from Jonathan Livingston Seagull, a tattoo he had done to match his father and uncle and mark his 16th birthday. The tattoo must symbolize freedom, integrity, self-determination – those traits learned and then possessed by Jonathon the seagull.

The other, on his torso, is in Hebrew and says “Yeshua,” which means “Jesus.” If Justin can keep those two role models in mind – Jonathan Livingston Seagull and Jesus – as he makes his way through the quagmire and miasma that is Hollywood and the pop music scene he will be doing marvelously and be worthy of great respect himself.

As Bieber is aged under 18 he needed parental permission to get his tattoos.  He and Selena only went completely public with their romance at the Billboard Music Awards show in Las Vegas last weekend – sharing kisses and hugs in the audience.

The young lovebirds smooched as Justin dominated the star-studded ceremony last weekend.  Selena appeared to be making a good impression on her boyfriend’s family, as she sat with her arm around Justin’s mother, Pattie Mallett.

Let’s just hope that the loving couple practice everything they do SAFELY! As adorable as little Justin is, we don’t want more little Beibers running around just yet, do we?